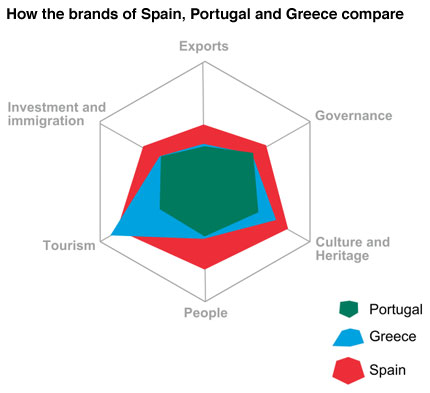 The first conclusion to draw is that Spain has a more solid, consistent and powerful brand than those of Greece and Portugal. Big countries have an advantage over small countries when it comes to branding, but Spain has outperformed much better than Portugal and Greece.

Second, Greece and Portugal are perceived as pretty similar, except in Tourism and Culture and Heritage, in which Greece leaves Portugal behind.

Third, Portugal lags behind Spain and Greece in every brand dimension – which means that it does not have any particular strength.

Fourth, after 20 years of EEC/EU membership, both Spain and Portugal have yet to convince that their governance is at least good – something which is very preoccupying. In the case of Greece, which entered 5 years earlier and therefore had an advantage, it is worse and most preoccupying.

Sixth, Greece’s tourism image is stellar, closely followed by Spain. They are two super-touristic power brands. Portugal, however, is left behind.