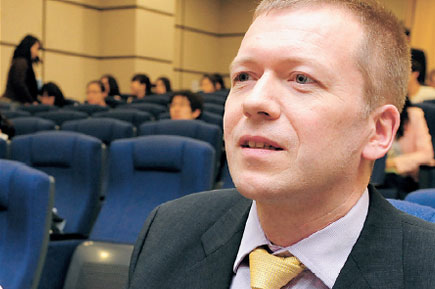 Professor Keith Dinnie of the Japan campus at Temple University recently gave a seminar at Yonsei University in Seoul to promote the Korean translation of his book “Nation Branding: Concepts, Issues, Practice (2008).”

In the book, the professor of business administration and nation branding expert analyses the unique nature of Korea’s weak national brand among other developed nations despite a strong economy boasting several internationally lauded corporations such as Samsung, LG, and Hyundai.

“This is very important and also quite unusual because in many countries the political leader either doesn’t understand nation branding or just doesn’t like the idea of it or has no enthusiasm. Also helping is the fact the current president has a business background. His background in business gives him an understanding of what you need to do in a nation branding campaign.” Dinnie feels that sustaining this level of government enthusiasm is vital to reshape Korea as a country that can stand toe to toe with other developed countries.

“I think the slogans ‘Dynamic Korea’ and ‘Sparkling Korea’ have been quite effective. They are appropriate for Korea because it is in fact a dynamic country, it is sparkling and full of life and vitality,” he said, “but what I would say is that it’s not enough just to have a slogan.” “You might need more than one slogan, for example a tourism slogan, an export promotion slogan or an investment slogan and in fact I think in the future countries will probably stop using a singular phrase because it’s very difficult – particularly if it’s just two words- to cover an entire nation.”

Though the current administration has the right idea in implementing various campaigns to boost the country’s global profile, those guiding the nation are sorely lacking in new ideas and more importantly, fresh perspectives from a younger, more cosmopolitan political contingent. “I don’t think it’s the case of changing the guard but I think it’s the case of adding to the guard. You can inject new blood while the old regime is still there and you can certainly engage with other people who have new ideas and that is actually very important,” he said.

Some of the factors Dinnie emphasizes in the successful re-tooling of Korea’s brand image are factors the country has already established itself such as technology, manufacturing, and pop culture throughout Asia.

The strategic improvements he calls for are as follows: to promote Taekwondo as an explicitly Korean martial art as opposed to an East Asian art form; sending volunteers to aid other countries afflicted by either natural disasters or civil unrest; granting global scholarships to the less privileged around the world; increasing external aid; reinforcing government support of culture and tourism; and improving treatment and benefits for foreigners and multicultural families residing in Korea.

But the most important element to the branding of any nation is food, Dinnie said. Cuisine can be a powerful agent reshaping public perception. “Almost every country in the world really should focus on promoting their food culture,” he said. “Countries should be more strategic in using the network of restaurants around the world as an opportunity to promote tourism”. “You go to a restaurant, enjoy the food and you see a travel brochure of the country and you might not necessarily pack a suitcase and fly there right away, but you’ll probably keep it in mind the next time you’re planning a trip abroad.”

He uses Malaysia and Thailand as prime examples of countries that have parlayed its cuisine to boost awareness and their national brand. Both the Malaysian and Thai governments have vigorously promoted their nation’s cuisine. The Malaysian government, for example, operates restaurants in Tokyo and London. In 2001, the Thai government announced its involvement in an effort to ensure that Thai food sold around the world is genuine.

Dinnie was initially opposed to the idea of nation branding when he was a student at the Glasgow Caledonian University in Scotland. “At first I was opposed to the idea of a nation being branded. I thought that was a terrible notion, but I came to understand as I did more research, nation branding is important because it is a way to avoid such lazy caricatures and stereotypes,” he said. “And ethically I think it is a good thing and also economically it can have a positive effect. If your country has a positive reputation that will surely be reflected in your economy.”
Interview by Song Woong-ki of the Korea Herald, first published here. Please note that Mr. Dinnie has pointed out two details on this interview here.