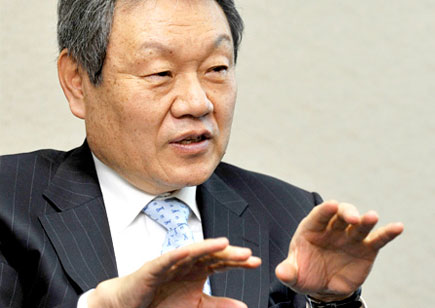 One of the things Euh announces is that Korea will look for a new identity design for all the government agencies. “The [Korean] Presidential Council on Nation Branding advised the ministers and the president that it will be more effective to present the ministries and offices through a unified design. We will be in charge of the project of unifying the various logos used by ministries and offices, because the logos currently being used are too diverse. It’s hard to say whether the logos represent a government body or not, and we want to give a sense that they are all parts of the administration”, he says.

Together with a new logo, he also said that the Council plans to craft a new slogan which will replace the previous “Korea, sparkling” and “Dynamic Korea” taglines. “Dynamic Korea” has actually been received positively. Korea started using the slogan in 2002 and enormous investment has been made to promote it. It is actually quite popular abroad, so we have reached the conclusion that it will be kept for the time being. Still, the council will consult with experts at home and abroad to decide on a new one. A preliminary survey will begin next month.

“In contrast, experts at home and abroad were skeptical about the effectiveness of “Korea Sparkling,” the slogan used to promote local tourism. It was established in 2007, so less investment has been made, and the council decided that it should be replaced.  Ironically, the slogan was created by Simon Anholt, whose London-based company is also behind the success of New Zealand’s “100% Pure” campaign. The new tourism slogan will again be outsourced to a foreign branding specialist, because the campaign will target foreigners and this is an area where efforts by native Koreans have limitations. The project will be handled by the National Tourism Organization, with our assistance.

“One thing is clear, however. The campaign must feature what Korea is best at. While most tourism campaigns feature history and folk culture, it is more important to show where Korea stands right now as a modern, industrialized nation. Posters of traditional Korean masks sometimes make foreigners wonder if the country is still a developing nation. We should aim to redefine the image of Korea”, Euh declares.

But the most interesting point of the interview is that Euh says that, contrary to previous reports, the success of Korea’s nation branding project’s won’t be evaluated against the Nation Brands Index, but against a new Country Brands Index which has been developed jointly with the Korean foundation Samsung Economic Research Institute (SERI). The new index, tentatively named PCNB-SERI Brand Index, will be published annually beginning November.

“The initial purpose of creating [Korea’s own] country brands index is to assess objectively how Korea’s brand has improved after the council starts working, like a self-evaluation. To secure objectivity, we asked the Samsung Economic Research Institute, an outside, non-government body, to create the model. There are already some other systems that can evaluate national brands such as Anholt’s Nation Brand Index and the East-West Nation Branding Global Index. But I believe strongly that the SERI model will be more efficient and accurate than other systems now in use. We want to evaluate nations around the world using our index in cooperation with a major global newspaper or journal such as Fortune magazine. By bringing on influential foreign media as a cosponsor to the SERI index, we will be able to make the best use of it.” Euh says.

According to the Korea Times newspaper, this move reflects a lack of trust among South Korean policymakers in the Anholt-GfK Nation Brand Index, which has been one of the most widely accepted measurements of a country’s brand power. Korea’s ranking at the Nation Brands Index stood at 33rd among 50 surveyed nations last year, falling from 32nd in 2007, 27th in 2006 and 25th in 2005.