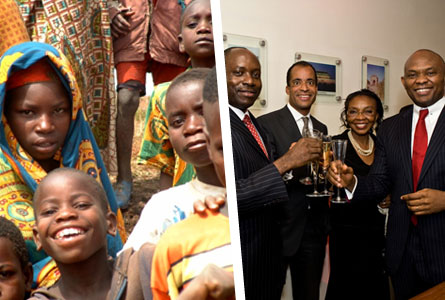 Brand Africa continues to be a dismal one. Images of poverty and conflict continue to dominate the perceptions of people around the world, particularly in the West. Africa is still seen as a charity case waiting for salvation from outside the continent. This negative view persists despite the enormous progress the continent has made over the past decade both economically and in the political sphere. Why is this so? What can be done to change this perception to one closer to the reality of our continent?

A brand is a shorthand capsule that encompasses the entirety of a much larger whole. A brand, over time, comes to stand for all the attributes, positive and negative associated with it. It is one of the most powerful tools of mass communication. Brands employ symbols and slogans and the aim of branding is to create associations in the minds of those who come across them.

Branding, in its more generic sense, is almost as old as recorded time. Sovereigns throughout history have realised the power of branding and used it to project strength or justice or glory. All ceremonial, with its attendant pomp and pageantry, is a form of branding. No one does this better than the British royal family, where the Queen, through the appropriate use of costume, gesture and pronouncement, provides a visual and audible link with Britain’s historical past and its continuum to the present day.

We normally associate branding with products and processes but in reality, branding extends to virtually everything. It is the perception that people form of individuals and countries.

In this context, we can see national branding, both positive and negative in slogans such as ‘Land of the free and home of the brave’ to stand for the US, or the pejorative ‘Evil Empire’ label that had been foisted on the former USSR.

Companies can create their own brands and change them at will. Nations project their brands through a variety of means – many of them too subtle for the average person to perceive. But nations can also be negatively branded by rivals or more often by foreign media, which tends to think in stereotypes and which then projects the perception as if it were the reality.

This has been Africa’s biggest problem. The branding of Africa as backward, primitive, childlike and violent goes back centuries to when Europe made contact with the continent. It worsened during the slave trade, during which Africa’s supposed backwardness provided the excuse for dealing in this horrific enterprise and the projection of Africa as ‘uncivilised’ provided the excuse for its colonial exploitation.

These deeply ingrained stereotypes, repeated by writers, artists, film makers and journalists over centuries became so deeply embedded in European culture that they generally hold sway even today. They continue to inform journalists, who view Africa through this dark-coloured lens and they inform even the well intentioned, who see only negative attributes awaiting salvation from the outside.

Country branding, if anything, is even more valuable than product branding because its aura envelops not only its companies but also its citizens and its national attributes. The country gains value as a whole and is admired and emulated. Its citizens are treated with respect and relationships with them are sought after. Not only are its products and services in high demand, its culture and philosophy are held in high esteem. It often attracts the best talent around and investors fall over each other to be part of the success story.

But branding is a double-edged sword. A negative brand image, such as that imposed on Africa, becomes a millstone around the neck of the continent. Perception is everything and if the perception of Africa is that of a continent racked by poverty, hunger, conflict, corruption and disease, then that becomes the ‘reality’ of brand Africa. Images speak louder than words and the persistent images of starving children and leaders living in luxury amid chronic poverty become the abiding signature of the continent.

“When it comes to Africa, the branding of the continent is particularly one-sided,” says Melissa Davis, who runs the London-based agency Truebra riding. “It is easy to mistake one of the world’s most disparate and compelling continents as an impoverished, warriddled charity case that is best to avoid.

This, she says, is despite the fact that some African countries are excelling in growth and the continent itself is only one of two regions that will show a positive growth this year. “The continent’s reputation continues to overpower the identities of its nations”.

This negative branding of Africa, she says, “is perhaps because the noisiest branding comes from ourside the continent. Africa’s dominant image has been created by the charity brands: the 1985 Live Aid to provide food for Ethiopia. 2005’s Live 8, ‘Make Poverty History’, G8 politics. Bono, Sir Bob, celebrity adoptions and Vanity Fair covers”.

While these campaigns are well meaning, “en masse, they have a tendency to create a perception of Africa as a continent that is beyond hope: too much poverty, too much death and an overwhelming sense of too may problems with too few solutions”. Africa is suffering from the ‘continental branding effect’, where every country shoulders the reputation of the others. She quotes a South African government advisor as saying “One of the greatest obstacles to Africa’s economic development is the well-meaning attempts from the West end up by branding Africa as a ‘basket case’. But a charity brand is fundamentally different from a growth brand. So Africa is simultaneously trying to present two incompatible ideas: a desirable destination and a charity case”.

Ruurd Brouwer, Africa director of the development bank FMO in the Netherlands, echoes these sentiments. He says that in order to attract investment to the continent, “we need to get rid of the sorts of images as depicted by aid agencies and instead replace them with pictures of successful African bankers driving Mercedes cars”.

He says it is not difficult to obtain pictures of dead bodies, kids toting guns and shanty towns. “The consequence of these pictures is simply that people grab their wallets and make money available for aid, not for investments.” But the difficulty is that the aid industry is massive – it provides well-paying jobs to thousands from the developed world and provides a steady stream of business revenue to a host of companies involved in it. The charities need to raise money by showing heart-rending images but in doing so, they are killing the continent’s ability to progress and develop under its own steam.

Brouwer says there are conflicting interests here. “There is money to be made, there are healthy businesses to be financed and in the long term, that is the only way out. And the existing image, which is more dominated by the aid industry, does not offer the solution we need.” “Perhaps rhe most important aspect of ‘brand Africa’ and one that seems to be absent from the international charity-focused brand, is the involvement of African people”, says Davis.

But the tide is changing. Many African countries are carrying out successful branding exercises. Morocco, Egypt, Kenya and South Africa have appeared in the top 10 of various international country brand indexes.

John Battersby, UK country manager for South Africa’s International Marketing Council, says branding Africa has two aspects. “On the one hand, there arc 53 countries all with their own identities, cultures, values and their strong and weak aspects. We don’t want to lump them all together as the Western media tends to do – as if Africa is one country”.

“On the other hand, as a continent, we are working towards a regional unity. So while each country would like to brand itself according to its own strengths and positive attributes, the continent as a whole must also rebrand itself”.

This lumping together of all African countries into a single entity has been a cause of great anger among Africans. “When there was a war in Bosnia, the world did not go around saying there is ‘war in Europe’ they singled out the country where the event was taking place,” says Baffour Ankomah, editor of New African magazine. “But if there is a war in one country out of 53 in Africa, then Africa becomes ‘a conflict-ridden continent’. This is just silly and incredibly lazy journalism.”

How can we go about changing this stereotype of Africa? The first step should be to challenge this ‘lazy stereotyping’ of Africa and to demand that if negative stories on Africa are published, they should be focused on where they take place, rather than on the generality of the continent. We should also demand that the reality of Africa be reflected by publishing the host of success stories that abound in this regio

“Certain characteristics have been attached to the continent for a long time,” says Battersby. “We have to work on detaching these labels and replacing them with positive stereotypes – of which there are many. There are setbacks in Africa – as everywhere – but when you draw attention to these, you must also draw attention to the successes. Africa has done remarkably well over the past two decades – most of the countries are functioning democracies, it was the fastest-growing region over the past five years or so and where else in the world will you find the graciousness, generosity, the community spirit and the wonderful sense of humour that you find the length and breath of the continent? these are the aspects that we should attach to the continent”.

But Africa has to find its own voice and its own image and promote it so strongly that it overpowers the charity-led, paternalistic branding imposed on the continent by outsiders for their own sell-interest.