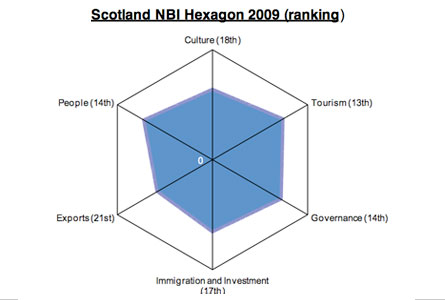 The government of Scotland has published on its website an extensive summary report on the country’s performance in the current Nation Brands Index 2009. As stated in its webpage, the Scottish government looks to assess efforts to “improve people’s perceptions, attitudes and awareness of Scotland’s reputation”, and for this reason it uses the Anholt-GfK Roper Nation Brands Index “to assess and monitor how Scotland’s reputation is perceived around the world in comparison to 49 other nations”.

Scotland ranked at the Nation Brands Index 2009 in the top 14 nations and that shows that Scotland has a high level of nation brand awareness, despite its small size in geographic terms. Its nation brand scores and ranks similarly to the other smaller, high income liberal democracies, like Denmark, Finland, Ireland and New Zealand. This shows that people can accurately identify Scotland as a country, despite not currently having the same constitutional status as these other nations.

Tourism, People and Governance are perceived as the main strengths of Scotland’s nation brand. So the country appears to do best on brand aspects that relate to “softer” sides of its nation brand (cultural heritage, good quality of life and friendly locals) than to the harder ones (exports, governance…). For example, tourism remains the dimension which respondents are most comfortable with when asked to think about Scotland, while exports is still an area of reputation for improvement – those surveyed do not attach much value to the “Made in Scotland” label.

Despite this, the diagram above shows that Scotland has a strong and fairly balanced image. Scotland rates as a top twenty country on five of the six dimensions (the same as in 2008) – and this balance across multiple sides is something typical of powerful nation brands.

As an add-on, it is also noteworthy that Scots are also pretty confident on themselves. Besides interviewing foreigners, the Nation Brands Index also asks nationals of each country (except for China) about their own country, and the Scottish surveyed pool showed self-confidence by ranking Scotland as number 1 (it should be noted that each of the panel countries that rank in the Top 20 on the NBI rate their own nation as number 1 too).

You can either read the report online or download the pdf file.