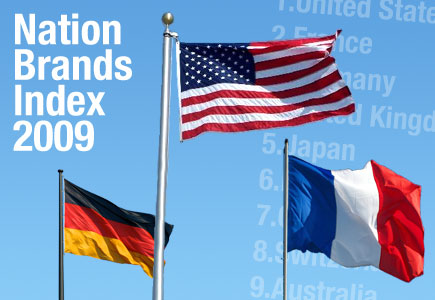 The long-awaited Nation Brands Index 2009, one of the cornerstones of nation branding and one of the most relevant tools to measure the nature and power of a nation brand, has just been released. The index, which surveys people from across 20 major developed and developing countries about their image of 50 countries, has revealed on this occasion an an unprecedented phenomenon – a dramatic improvement in the rankings of one country, the United States.

Indeed, if there was one undisputed headline for the Nation Brands Index 2009 results, it would be Barack Obama’s impressive effect on Brand America. Of course most people was expecting an improvement of the US standings in the Nation Brands Index with Obama’s election (and we predicted it as early as January 2009, coinciding with his inauguration speech), but the results have surpassed all reasonable predictions.

While most countries in the Nation Brands Index have continued to move slowly, either upwards or downwards, the United States has advanced no less than 7 positions in a row and has taken the top spot as the country with the best overall brand. This is a “dramatic change”, confirms Simon Anholt, the mastermind behind the Nation Brands Index.

“What’s really remarkable is that in all my years studying national reputation, I have never seen any country experience such a dramatic change in its standing as we see for the United States in 2009,” explains Anholt. “Despite recent economic turmoil, the U.S. actually gained significant ground. The results suggest that the new U.S. administration has been well received abroad, and the American electorate’s decision to vote in President Obama has given the Unites States the status of the world’s most admired country.” 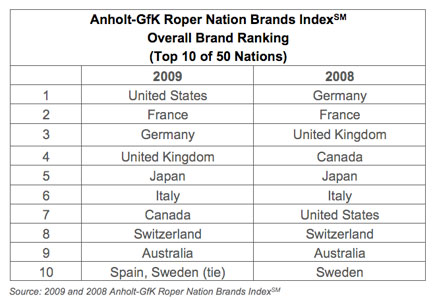 Turning to the rest of the NBI rankings, mostly the same countries are in the top ten as in the Nation Brands Index 2008 – but also with some shifts in position. France again captured second place overall, while Germany and the United Kingdom fell to third and fourth, respectively. Japan (5th) and Italy (6th) did not shift rankings from 2008.  However, Canada lost ground, slipping from fourth last year to seventh in 2009. Switzerland, Australia, Spain and Sweden round out the top 10.

Besides the US, other major movers in the overall ranking include several developing countries – such as China, which climbed several spots from last year to 22nd in 2009.

The spectacular improvement of America’s image is the consequence of an improvement in most dimensions considered in the Index: Exports, Governance, Culture, People, Tourism and Immigration/Investment.

In the Governance dimension specifically, the fact that the United States has made significant gains is in agreement with many other surveys that have shown vast improvement in the global image of the United States since the election of President Obama. Under the presidency of Mr. Obama, who according to a 2009 WorldPublicOpinion.org poll has the confidence of many publics around the world, the U.S. now ranks 7th for competent and honest government, and 10th for respecting the rights of its citizens and treating them with fairness, contrasting to 22nd and 21st respectively in 2008. However, the U.S. still has further room for improvement for its behavior regarding international peace and security and environmental protection.

On the People dimension, “the United States shows the biggest change for any country on any dimension with a dimension ranking of 5th this year from 13th in 2008. Twelve out of the 20 panel countries rank the U.S. in their top 10 this year compared to only eight in 2008 and the U.S. ranks below 20 only in, ironically, a major aid recipient country Egypt (26th) and its southern neighbor Mexico (22nd). The U.S has improved its rankings for all three questions on this dimension with a substantial change on welcoming people (16th in 2009 vs. 25th in 2008)” say the Nation Brands Index authors.

This improved perception of the U.S. is not only in the area of Governance and People, as there are improved perceptions for People, Culture, and even Tourism of the United States. “The general positive goodwill has also spilled over to the other dimensions including Culture and Tourism where the U.S. has recorded stronger reputation performance compared to 2008”, add the Nation Brands Index authors.

In reality, and generally speaking, it seems like the United States, more than improving its image on the world, has been restored to its rightful spot as the world’s first economy. As the richest and most powerful country in the world, being at the 7th place was a freak of nature – an evidence of how awfully former President Bush had managed America’s image. Now, the country has recovered its natural position as the most admired country in the world.

Meanwhile, China rose to 22nd. Anholt, who has been doing the annual poll since 2005, indicated that “It is the first time China’s profile has risen. Since the Olympics its score for tourism and its people has risen and that has helped to stem its decline. China has always scored low on human rights and environmental policies but high on cultural heritage”. Nations at the other end of the spectrum on the survey included Kenya and Columbia, tied for 47th place, Angola at 49th, and Iran took the 50th spot.

The impact of the economic crisis on nation brands

This year’s Nation Brands Index study also includes questions on the impact the global economic crisis is having on people’s opinions and perceptions towards the nations tracked.

Even if top-line results from this particular area will be released later this fall, the Nation Brands Index authors have informed Nation-Branding.info that while the United States are generally regarded to be responsible for the economic downturn, the country is also perceived as the country which will lead the economic recovery.

“The United States, blamed by many around the world for having created the global financial crisis, sits on top of the list as the nation whose credibility is most negatively affected by the crisis. However, the U.S. is not just seen as the leading source of the problem; it is seen as the world leader providing the solution, as it tops the fifty nations’ list for its efforts to address the crisis”, say the researchers at the Nation Brands Index.

For an analysis on the evolution of the top-ten country brands, read the Nation Brands Index 2009: an analysis blog post.