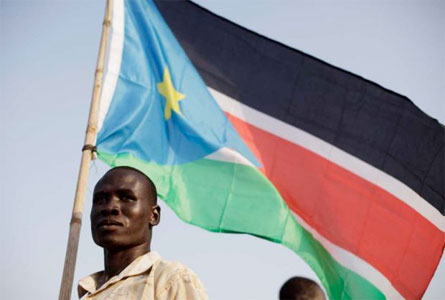 It’s official now. Throw your atlases to the bin – they’re useless now. A new country’s born today. It’s provisionally called South Sudan, which will be the baby country’s name while a better, proper name is found (to have a look at the South Sudan’s naming issue, you can read this previous story: Naming a nation: Southern Sudan).

The newborn country not only has a name (even it provisional), but also a flag and an anthem, as this story on CNN recaps:

Name: Not as simple as it sounds. Prior to independence, the territory that forms the new country was referred to as Southern Sudan. According to Southern Sudan’s information minister, more than a dozen names have been suggested for the new country, and the new name Republic of Southern Sudan may only be temporary. “Should the people of South Sudan in the future want a new name, they will have that chance,” he told the New York Times. Other suggested names have included Azania, Nile Republic, Kush Republic and Juwama.

Flag: These aren’t a requirement of nationhood but no country is now without one — and as a talisman to rally patriotism, nothing quite beats a fluttering flag. Some standards are born of convenience: Indonesia’s red and white flag was reputedly created when independence fighters tore the blue strip from the tricolor of their Dutch colonists. Others, such as America’s stars and stripes, evolve along with the growth of the nation. Unsurprisingly, since a flag-raising ceremony is scheduled for Saturday, South Sudan has already designed its pennant: a black, red and green tricolor banded with white stripes and featuring a yellow star on a blue triangle.

Anthem: It might seem a trivial matter, but a country needs a rousing tune, if only to have something to sing if they win international sporting events. But getting it right can be tricky. Peru has debated replacing the first verse of its anthem, sung since 1821, after criticism it was too gloomy. Southern Sudan held a competition to pick its winning tune. The winner, beating 42 entries, features lyrics that exalt “martyrs whose blood cemented our national foundations,” set to a suitably anthemic arrangement of drums and parping horns.

From a symbolic point of view, the country has all the necessary gear so that people can identify it – a name, a flag and an anthem. That’s supposed to be the minimum survival kit for national identity, but that’s not really enough.

From a nation branding perspective, South Sudan has been born as just another African hellhole (no disrespect intended, it’s just to be graphical) country, a god-forsaken place in Africa. It’s not a place that has a particular significance. It’s a new country, yes, but it has no meaning. It’s a country, not a brand. It means nothing yet. It’s no different from its neighbours. So one has to say that so far South Sudan has missed its chance to say something special about it – to ‘brand’ itself so to speak.

If South Sudan wants to be a nation, not only a state, it needs significance, meaning, vision, a role to play. It needs nation branding.

South Sudan is now a country, but it’s still has much work to be a nation, and even more work to have a useful nation brand. In order to have a nation-brand, it needs to have a purpose, a reason to exist beyond exiting a country that was more a prison than a homeland. It needs an identity it can call its own. It needs to ask – what’s the world in need of? What can we provide? Why would the world need a country like us? What can we contribute?

A country brand for South Sudan not only can make an heterogeneous country more cohesive bringing a shared vision, but it can also find a real identity for a country beyond the flag and the anthem and use that identity to attract tourism, investment and skilled talent.

At least South Sudan has already got a national symbol more important than the anthem: a beer brand. It’s called White Bull beer, aptly labelled ‘The New Beer for the New Nation’. Let the nation-building start.