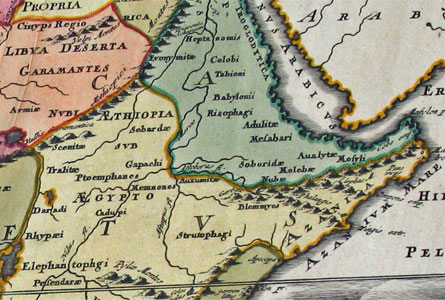 Country naming is as old as countries. Historically most countries have ‘accidentally’ obtained their name from the peoples or tribes living on them, from empires and kings ruling over them, from physical and geographical features found on them, or from a specific word in the indigenous language of the country’s natives.

However, it hasn’t been rare either to name countries with a specific and deliberate intention to convey a particular identity, an idea of them. Examples abound – just think about Costa Rica, Liberia, Greenland or the United Kingdom. They all are names chosen to project an idea just like in a corporation. They were named just like you would name companies and brands such as Lexus, Liberty Mutual, Natura or United Airlines.

Just like corporations, some countries have considered changing the names of their countries, like Lithuania and Slovenia. A country now facing the issue of country naming is Southern Sudan, which is a projected country that could make its appearance in early 2011. Next month, a referendum on independence will be celebrated and in case the secessionist option wins on the plebiscite, this region is expected to upgrade to statehood. But it has yet to find a name for the country.

Southern Sudan is mostly populated by either Christians or animists of black African race who are ethnically similar to other populations in former Eastern African colonies such as Kenya or Uganda, while Northern Sudan has been penetrated and dominated by Muslims of Arab ethnic stock. The current government in the region, called the Autonomous Government of Southern Sudan, has already set up most of the institutions needed for sovereignity, but it still does not know how the new state will be called.

One possible option is ‘New Sudan’, but some oppose the idea as that name would associate the new country with the actual Sudan, which is considered a pariah state. For a weak, new country with weak influence, getting the world population to distinguish between ‘Sudan’ and ‘New Sudan’ would take aeons. Many people still confuse South Korea with North Korea and don’t remember which one is the rogue state, so any combination of names including the word ‘Sudan’ will probably be counter-productive to the new country, nationals say.

In fact, another suggestion most Southern Sudaneses don’t like either is ‘Southern Sudan’. They discard it because the name raises fears that this name would also confuse people, as many people would think that ‘Southern Sudan’ is the Southern region within Sudan, and not a different country.

But while there are ones who oppose the ‘Sudan’ word, there are others who don’t want to lose it. The latter consider their region to be the real ‘Sudan’, while the Northern part, which has become arabized and islamized, is not. They unpolish semantics to substantiate it. ‘Sudan’, they say, etymologically means in Arabic ‘land of the black people’, which is how fairer-skinned Arabs called the lands of conquered black tribes under their power. So this would justify that the name ‘Sudan’ makes more sense in the blacks-populated South than in the Arab-occupied North.

Some of the other names that have been discussed are Nilotia or Nilotland, which are names derived from the Nile river. The White branch of the river runs through the region and is considered to be the country’s most important geographic feature. But one problem is that Southern Sudaneses are not the only Nilotic people in Africa (the Nile river waters crosses territories in Egypt, Ethiopia, Uganda and Kenya down to Tanzania). Additionally, not all Southern Sudanese peoples are of Nilotic origin, as there are many ethnic groups in the region with no relationship with the Nile or its ancient civilization whatsoever.

Finally, some express preference for Cushitia or Azania, which are two ethnic and geographic names that have been applied to various parts of sub-Saharan Africa (see map above), even if they are in disuse today. Others prefer the Nile Republic, arguing that this name would put the country on the map and build an attractive image around a world-famous asset, the Nile river. But, as in the Greece-FYROM name dispute, tensions with Egypt, which considers itself the guardian of the ‘Nile brand’, could appear if the new country chose to name itself so.

The issue of the wannabe country’s name is still on hold. But name is not the only thing Southern Sudanese authorities must define when the region presumably upgrades to statehood in February 2011. The new proto-state has already chosen a national anthem, but it still needs a new coat of arms. And there are disputes on this issue too, as some say it could portrait a buffalo, which is an animal with historical ties to the Southern Sudanese struggle, while others advocate for a secretary bird. Other national symbols are yet to be defined, such as a national motto, a national currency note, and even what the official language of the country will be.

While any veteran country would take for granted all of these things, Sudan has yet to define them. And it’s fascinating to watch it live. A new country is about to be born and it needs a new set of national symbols to ‘showcase’ its new status, project its national identity and make its values and nature visible. To brand itself, no less.