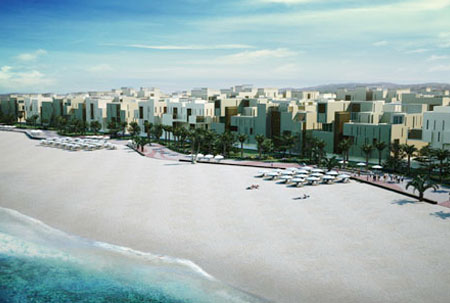 Last Sunday, a new nation branding mark was launched for Oman, the Arabic Sultanate located at the exit of the Persian Gulf, after a series of workshops set to explore Oman’s brand. The Omani nation branding iniative’s launch and future development is being leaded by the  newly-created and government-run Oman Brand Management Unit (OBMU). Here is a merge of several articles with several members of the OBMU, most prominently Sayyid Faisal Al Said, the OBMU’s chief executive officer.

“As a communications strategy and a practical initiative, nation branding allows governments to better manage and control the image they project to the world, and to attract the right type of investment, tourism, trade and talent, successfully,” comments Sayyid Faisal Al Said.

Pushing a distinctive image and message is a critical dimension of what OBMU will be involved in.

“Indeed, over the past 18 months we’ve been running a series of domestic and international branding engagement workshops that has attracted participants from tourism, finance, environment, health, sport, education, media, technology, security, agriculture to manufacturing. We’ve explored the notion and importance of nation branding and walked participants through the research, philosophy, goals and objectives behind the new national brand mark which under the patronage of HH Sayyid Haitham bin Tariq Al Said, Minister of Culture and Heritage, will be unveiled on Sunday at the Al Bustan Palace Hotel.”

Tufool Al Dhahab, Marketing and Events Manager at ITA and an attendee of previous OBMU workshops, commented: “If we’re to increase our international appeal and reap the financial rewards on offer then a nation branding exercise is exactly what’s needed. The launch of the new brand mark couldn’t be better.”

When asked to provide a working definition of what nation branding was, Sayyid Faisal Al Said took considerable pains to explain what it wasn’t.  “It’s not destination branding or marketing initiatives; it’s not an image makeover, nor an advertising campaign or a marketing strategy; and it’s most emphatically not just a logo. Rather, all of these things are part and parcel of the totality of the nation brand; but they aren’t in themselves constitutive. In simple terms, your brand is what they say about you when you’re not in the room.”

But how do you create a brand?

“Nations are already de facto brands, regularly projecting their assets, attributes and liabilities to a public at large, whether intentionally or not,” says Sayyid Faisal Al Said.

“The nation brand is a clear and simple measure of a country’s ‘licence to trade’ in the global marketplace, and the acceptability of its people, hospitality, culture, policies, products and services to the rest of the world.  The only sort of country that can afford to ignore the impact of its national reputation is one which has no interest in participating in the global community, and no desire for its economy, its culture or its citizens to benefit from the rich influences and opportunities that the rest of the world offers them.”

Regardless of the makeup of stakeholders or the qualities of the core idea, the primary responsibility for the success of Oman’s brand lies with people, suggests the OBMU CEO.

“We’ve seen enough product advertising to know that what we actually remember more are people, the service they give us and the stories they have to tell, rather than the pictures of mountains or beaches. So brand ambassadors will be used both within Oman and overseas, to tell the Sultanate’s story. We’ll over the years create hundreds of these people who’ll exemplify the brand in action. That’s very exciting indeed,” remarks Al Kalbani.

As Sayyid Faisal continually took pains to explain, the nation brand may be augmented and made visible through its new brand mark and set of exciting initiatives, but these aren’t effective forms of communication without the wholehearted participation of its representatives. Nation branding is, at its core, a concerted and comprehensive strategy by national citizens of all strata of society to assimilate and communicate this new national identity on an ongoing basis.

“If this project is to work then we need everyone’s support,” emphasised Sayyid Faisal Al Said.

To cast a nation in the role of a brand implies that it acts as a producer to customer. But what does Oman produce? And who are the consumers enticed by Oman’s brand placement and location marketing? And how does the process of exchange take place; who gives what to whom and where?

According to Sayyid Faisal Al Said, few know the answers to these economically crucial questions. Civil servants around the world repeat the mantras of “attracting foreign direct investment” and “encouraging innovation and entrepreneurship.”

They reel off a list of advantages offered by their country to the lucky investor, tourist, expatriate, or businessman. But many lack an understanding of the process and meaning of nation branding.

“Brand efforts must permeate every level of Oman and be present at every point of a customer’s experience. Indeed, this is the challenge OBMU is taking on. We see the launch of the new brand mark, held under the patronage of HH Sayyid Haitham bin Tariq Al Said, Minister of Heritage and Culture, and scheduled for Sunday 25 January at the Al Bustan Palace Hotel, as the beginning of that work,” remarks Sayyid Faisal Al Said.

What a potential customer thinks, does and ultimately buys is driven by his perceptions of the country it comes from. “Like any country, Oman’s brand is experienced through various encounters, these range from the level of customer service tourists receive in hotels, to how visitors are welcomed by passport control, through to the quality of products bearing the Origin Oman label,” suggests OBMU’s Azzan Al Busaidi.

“Let’s be frank,” argues Al Busaidi “people believe what they believe about a particular country, because they’ve believed it all their lives. For example, Ferrari is Italy and Italy is Ferrari, right? Whether managed or not, every country has a brand. Think back 20 years and if I were to say to you “Finland” you’d probably say “cold”, “midnight sun” or “the northern lights”. Now, you’re more likely to say “mobile phone technology”. New Zealand is another interesting case, 20 years ago it was perceived as a sheep farm at the bottom of the world, today, it’s the home of extreme sports, the world’s most famous rugby team, beautiful snowcapped mountains and high quality natural products. These stories clearly illustrate that nation branding can and does work.”

With the impact of globalisation and the rise of the ‘Attraction Economy’, it’s increasingly important that Oman gets it international image right. “Essentially, we’re up against every country in the world competing for the consumers’ attention and respect. Let’s be clear, consumers are attracted to clear and consistent messages about things they value, from competent governance, to friendly and hospitable people, to financial transparency and investment opportunities. It’s in these areas that OBMU will be working with a host of public and private sector partners to present unified and coherent messages,” states the OBMU CEO.

While the notion of nation branding is relatively new compared to the history of nations, the practice has always existed through public policies and economic development. “If you look back at our history, Oman has been involved in nation branding since the days of Ahmed ibn Majid, probably the world’s greatest ancient navigator,” smiles Sayyid Faisal.

“It’s our role at OBMU to encapsulate the fundamental common purpose of Oman and communicate that narrative domestically as well as internationally. We want to harness Oman’s energy, create forward momentum and effective common behaviour. The launch of the brand mark on the 25 January will provide us with that all important initial momentum,” comments Sayyid Faisal Al Said.