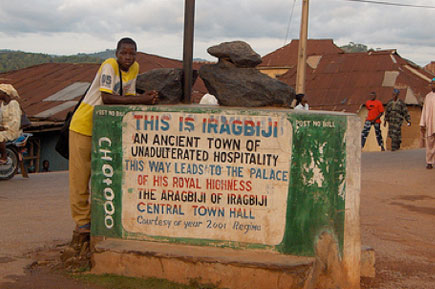 Generally speaking, African countries have really, really bad nation brands. Corruption, abuse, tribalism, religious fanaticism and the lack of most of the basics in daily life have rendered these countries mostly unattractive for many of the facets of a nation brand, from exports to culture or diplomacy in the world, let alone quality of life. Except for vacations and raw materials, chances are that you will not find yourself buying anything Botswanan, Moroccan, Ugandan, Mauritanian, Algerian, Nigerian in the next 10 years.

But African countries, and specifically African people, because of their situation are also the ones with the greatest potential on Earth. Everything is waiting to be done, and everything can be done better than the others have, applying the tested best practices and learning off the mistakes of European and North American countries.

When it comes to the economic development of a country and its image, one of these best practices is, of course, nation branding. One of the African countries that have embarked in a nation branding process is Nigeria. Nigeria is precisely one of the worst nation brands in this planet with its crooked reputation, and in fact it is at position #49 (out of 50) at the Anholt’s Nation Brands Index 2008. Last February 9th, Senator S. N. Anyanwu, chairman, Senate Committee on Communications on the occasion of Nigeria’s National Image Rebranding, delivered the following discourse about Nigeria’s nation branding:

Branding has traditionally been associated with products and services rather than nations and places. Branding of a nation or a place is the process whereby a town or country through a deliberate predetermined programme create~ a unique and competitive identity for itself with the objective of positioning the place or country, internally and externally as a good place or country for trade, tourism and investment.

In rebranding Nigeria, we must take deliberate measures to get Nigerians to believe in themselves and trust in their governments and institutions. We must get the world to believe and see Nigeria as a country endowed with positive potentials not only in her economic endowments, like abundance of oil and gas and arable land but in the enduring quality of the content of the character of the average Nigerian – fear of God, belief in the truth and hardwork, fairness and justice.

The world must see Nigeria as she is, from the prism of the majority of her citizens, not from the myopic view of the corrupt and selfish ones who are in the minority. This effort at rebranding Nigeria must be deliberate and sustainable.

The government of India for example, set up and financed the India Brand Equity Foundation as a lobbying group with the task to dismantle the negative stereotypes that could brand India and to broadcast instead its positive stories. Ajay Khanna, the Chief Executive Officer of this Foundation always told the press “my job is to tell the world the good news about India on a daily basis” explaining that such aggressive plugging of modern India’s virtues would have tangible results, inspiring greater international excitement about the country and ultimately attracting more foreign investments.

Before the setting up of this foundation and for many years India was seen as a nation of Snake charmers, an exalted exotica, but today India is seen as an efficient English speaking nation that has embraced modern management techniques. India is today a hub for research and development for various IT and Pharmaceutical companies, she is in fact one of the robust emerging markets. India represents the world’s fastest growing cellular market and its Vodafone recently launched a branded service across India rolling out what could be called the world’s largest rebranding company.

The practice of medicine, ICT and banking in India have excelled beyond the world’s imagination. Many Nigerians now go to India for Kidney, Liver and Lung transplants and return within a few weeks to their jobs. Hitherto, no one trusted India’s technology or educational qualifications from that country. First degrees from India were regarded as equivalent to Higher School certificates in Nigeria. India was regarded as a very mystic nation where magic rather than science held sway.

Malaysia under Prime Minister Datuk Seri Abdullah Ahmad Badawi succeeded in branding herself internationally as a corporate nation with integrity, quality, security, service and efficiency. The people very much believe in themselves. Malaysia adopted the practice of good governance, transparent, timely and truthful disclosure of information, effective action against corruption and inculcating a culture of excellence and accountability. Because of this rebranding, Direct Foreign Investments increased to R.M 17.9 billion in 2004 from R.M.9.4 billion in 2003. We may recall that Malaysia obtained palm nuts from Nigeria in the mid 60s, today, Malaysia produces more and better quality vegetable oil than the rest of the world.

Because of the effective branding of United Kingdom education, it received 8000 applications from Nigerians in 2003. In 2005 20,000 applied to study in UK. 80% of Nigerians who wish to study abroad prefer the United Kingdom.

In the effort to rebrand Nigeria’s image, we must not only believe in ourselves, patriotism must become our bedrock, irrespective of tribe, ethnicity and religion. We must recognize and appreciate merit no matter where it comes from. We must deemphasize quota while taking steps to encourage quality education for all Nigerians to bring about a level playing field. Our electoral process must be credible and must be such that throws up patriotic citizens.

Nigeria, the sixth largest oil producing country in the world, with a population of over 140 million has a poor image. A survey conducted in 2004 of 146 countries placed Nigeria as the third most corrupt country in the world despite these positive attributes. The problems that have eroded Nigeria’s image include bribery, corruption, unemployment, road infrastructural development, over dependence on the oil sector for government revenue, poor work ethnics, increasing dissatisfaction with government political structures, the irritating attitude of some of our politicians and the corporate large scale organizational irresponsibility, inadequate funding of our educational system and health sector, neglect of agriculture, long period of military dictatorship, violence and crime.

Efforts at rebranding Nigeria’s image started in July 2003 by Chief Chukwuemeka Chikelu – the then Minister for Information, who launched the Nigeria Image Project later named” Heart of Africa Project’.

The governments must ensure justice, equity and fair play. They must provide the framework, security for all, employment, infrastructure and above all judicious use of public funds, in order words they must be sincere in fighting corruption without fear or favour. These are the actions that could get Nigerians to start believing in their country. Nigerians are very patriotic and easy. No one can expect them to believe in the country, when they see some government officials cart away billions without being punished. Doctors know that the only way one can start curing Cancer is going first to the root of the Cancer.

National Orientation Agency has been given this responsibility to assess their performance. But the truth is that you can only give what you have or teach what you know. As an Agency train them and empower them and set measurable goals for them.

Transparency international is the Global Society Organization leading the fight against corruption. It is this agency that brought to the public view Nigeria’s position on the corruption inde).(. The attitude of Nigerians and the publications in our media have not helped matters.

No media criticizes its government and people like our media does. Nigeria media has a responsibility of emphasizing some of the positive aspects of our life.

On the other hand, Nigerians have a lot to be proud of. Recently the cure for Sickle Cell was discovered in Nigeria and the drug Nicosan has been approved for production. A few days ago a Nigerian, Dr. Obiyo Nelson produced the medication for the cure of Diabetes. This has been confirmed by the National Food and Drug Administration of the United States of America. Emegwali is a Nigerian, so are Leo Stan Eke, Dr. Bath Nnaji and a host of other Nigerians, who have shown tremendous industry in Science and Technology. Why do we not rebrand Nigeria’s image to emphasize our positive attributes?

Today, the Nigerian Senate has earned it’s respect throughout the world because of the level of stability, maturity and wisdom the Senators have exhibited. This credit goes to one man who is here with us today, the Nigeria Senate President, Senator David Mark, GCON.

Ghana yesterday was a struggling country; Angola had survived years of civil war. Today, these countries, irrespective of size, tribe, groups, religion, appear to be the best for any foreign investor.

Obama has proved to us that colour has nothing to do with it. Nigeria can, and truly, yes we can.

I will share a small story with you of a white guy who was hired by one of the states to help market a state project outside this country. From checking in to our local airport, to taxi, even hotel attendants, he was warned and continuously reminded that he must be careful, that this is Nigeria. This white guy, because his name meant a lot to him, returned the deposit he was paid and asked the state officials that the marketing of that project and indeed Nigeria should start and begin here; we have to believe in ourselves. Government over the years has betrayed the trust people bestowed on them. But a people get the kind of leadership they deserve. We can make change, we can change this country if we can begin to live above tribalism, ethnicity, classmate and next of kin syndrome. Yes we can.

I look forward to this Stakeholders Forum fashioning out the modalities for executing this project to erase our current negative image and rebrand Nigeria’s image to uplift the dignity of our people and country, to show case the positive aspects of our life and attract for us increased Direct Foreign Investment so that in a few years time every Nigerian can walk straight and tall in our streets and those of Europe and America as was the case in the 60s and 70s.