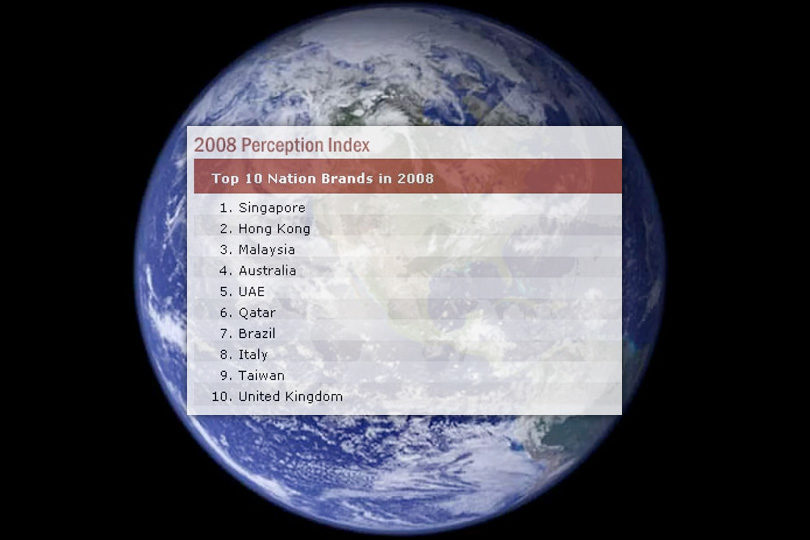 We’ve already spoken about East West’s global nation brands index earlier, an index that is built with an algorithm and perception metrics. Today, this index released its first annual edition and, according to the results, Asian countries enjoyed the best reputation in international media: three of them (including one territory) grabbed the top three slots. Singapore was number one, with Hong Kong in second place, and Malaysia third. Australia ranked fourth. 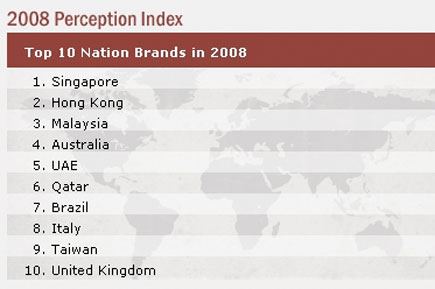 Also published on February 10 were perception indexes for Q4 of last year. Quarterly indexes demonstrate just  how much events can impact perceptions of countries. The United States, for example, was ranked 131st in the world for the year. However in Q2, it ranked 34th, its image helped by a rapidly improving situation in Iraq. The onset of a severe financial crisis and recession in the middle of the year drove perceptions downward, and in Q3 the US was 144th. (Data collection in this first year of the indexes began in Q2.)

The indexes are produced by East West Communications, a Washington-based consultancy specialized in nation branding and government communications, in collaboration with Ohio-based Perception Metrics, which developed the algorithm that analyses the tone of articles based on how words and phrases (in a lexicon of16,000 terms) are related grammatically to the name of a place.

East West president, Thomas Cromwell, noted that, “The indexes, global and regional, help a country see how it is viewed in the world, compared with others, and enables interested parties to track the impact of national events and policies on international perceptions.” He added that, “The real benefit of the technology is that it can be used to generate specific nation brand perception reports that identify which terms and phrases are creating positive tone in coverage, and which negative.” The reports can compare one country to another, one sector to another, and so on.

“Perceptions drive decision-making,” Cromwell said. “They affect everything from how a country is treated on the world stage, to investment flows, exports and tourism.”

“Countries can use the data generated in the indexes to address their weaknesses and build on their strengths,” he added.

The East West Global Index 200 for 2008 ‘s regional indexes, ranks by volume and by quarters 1,2,3 and 4 are available at EastWest’s website here.