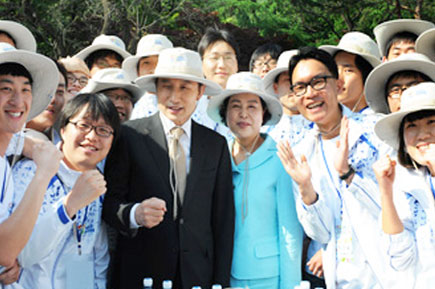 As most of you know, South Korea is developing a nation branding program whose ultimate objective is climbing 18 positions at the Nation Brands Index. In order to reach this goal the government created a Nation Branding Council, which in February this year presented a 10-points action plan. Two of the tactics within this strategic plan are the creation of a volunteer corps and the explotation of South Korea’s modern culture, which has grown popular in the last decade. The council does not appear to be wasting time and has ignited both tactics within a few days’ difference.

The South Korea’s nation branding council is advancing fast and on April 30th it launched World Friends Korea (see picture above), which is the name of the group of volunteers which will strengthen Korea’s goodwill activities in underdeveloped or developing countries around the world in an effort to become a more responsible member of the international community. The World Friends Korea is the country’s version of the Peace Corps in the United States, launched in 1961 to promote peace and friendship worldwide, officials said.

“You can call the World Friends Korea the unified brand of the country’s overseas volunteer activities,” said Euh Yoon-dae, the chairman of the nation branding council. “So far, government agencies have had their own volunteer programs in foreign countries, but from now on they will work together under a shared goal. My council will help coordinate their activities.”

“Today is a remarkable day for Korea’s peace missions abroad. You are seeds of hope and friendship,” President Lee Myung-bak said during the inauguration ceremony. “There are many countries out there that need your services. Your contribution will help improve Korea’s global reputation. You are civilians, but should act like diplomats.” In a congratulatory message, U.N. Secretary General Ban Ki-moon, a former South Korean foreign minister, also urged Korea to send more volunteers around the globe and increase its role on the global stage.

The volunteers will work with governments, schools, non-profit organizations and businessmen in various areas, including education, the environment, agriculture and information technology. They will also play an important role in promoting Korea’s culture and food around the world, officials said.

In addition to the government-run volunteer programs, those run by religious and civic groups will also get full support from the administration, officials said.

Exploring the hidden powers of Hallyu

For those who don’t know, hallyu is a term that refers to the surge of popularity of South Korean culture around the world over the turn of the century, especially among the young generations. Over the last 10 years, South Korean music, soap-operas and modern culture has grown popular in the far East first, then to India, Iran and Central Asia secondly, and is now approaching the shores of the Western world by having reached Israel, Turkey and Russia. Because of its centrifuge explosion, hallyu is also called “Korean wave”.

Park said that it has been demonstrated that hallyu has changed the way foreigners perceive Korea, and backed this up with empirical studies. A local polling agency Net Intelligence & Research conducted two public opinion surveys of Chinese people in 2004 and 2006, respectively to see if there had been any change in their perceptions of Korea before and after their exposure to Korean soap operas, the most popular element of hallyu.

In 2004, 68 percent of Chinese answered they had ever watched Korean TV dramas, and the rate two years later found an increase of 24 percentage points, standing at 92.2 percent. The surveys found approximately 60 percent of Chinese who had been exposed to Korean dramas came to have a positive image of the country. The same agency also conducted polls twice during the same period in Japan, and found a similar trend had occurred in the country as well. In 2004, about 61 percent of Japanese said they had watched Korean dramas and the rate in two years rose to 67.7 percent. About 42.5 percent of Japanese said their perception and impression of Korea has changed in a positive manner after they watched Korean dramas.

Over the past decade, policymakers have sought the role of government to link the cultural boom to trade, but their efforts have produced few tangible outcomes. Prof. Park Jung-sook warned that “the government should not be overly interventionist because of possible negative fallouts on an essentially creative process where private sector players, such as artists and businesspeople, are involved in”. “Also, the role of government should not be overt because injecting too much nationalism into a non-political, consumer-driven process will eventually draw a backlash from people living in other continents.” Despite the complexity, Park asserted that there is certainly a way that can help avoid the backlash.