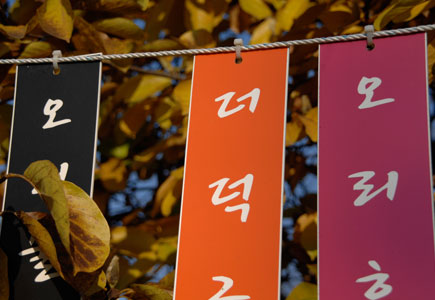 No doubt, South Korea’s nation branding project is very ambitious, and the Koreans take it seriously. For instance, the presidential jet, bynamed the “Air Force One” was recently revamped, and the exterior design was supervised by the Air Force and the Presidential Council on Nation Branding too. The Korean branding project is also very active. No month passes without news from yet another action within Korea’s nation branding plans. After creating a Peace Corps and exploring the possibilities of Hallyu, the name by which the Korean wave of cultural exports to neighbouring countries in Southeastern Asia is known, Korea continues to move forward several aspects of its nation branding project.

On one side, the Korean government announced on October 18, 2009 that it will introduce a new logo to be shared by all government offices before the end of the year, a move largely aimed at promoting the country’s national image in the international community. The move comes as state ministries and agencies currently use their own logos.

“This (introduction of an integrated logo) will allow people to find out with just a glimpse whether an office using the new logo is a government office or not”, an official from the Presidential Council on Nation Branding said. The new icon will replace the current one, which is based on “mugunghwa,” the rose of Sharon.

Korean officials think that the various logos used by different offices were causing confusion even among government officials while also adding significantly to costs, as each time government offices underwent a major restructuring or reorganization, they had to come up with a new design. “The new logo will have a common design and an overreaching theme that will allow each government office to simply put their name inside the logo”, the council’s official said.

In a more specific move to raise Korea’s awareness, the Korean administration also announced in October this year that it plans to set up 150 Korean-language schools overseas by 2015 as part of efforts to promote cultural exchanges. The language schools, all called the King Sejong Institute, will play a central role in globalizing the Korean alphabet or hangeul, as well as providing information about the country, officials said.

The country currently has 35 such institutes, mostly in North America and Japan. The government plans to set up others in Southeast Asian countries, where Korean dramas and pop songs have become increasingly popular.

Globalization of hangeul is one of the key projects aimed at improving Korea’s reputation overseas. The Presidential Council on Nation Branding said the different names of Korean-language academies overseas will be unified under the King Sejong Institute to better address the growing number of foreigners wanting to learn the Korean language.

“A growing number of foreigners are trying to learn Korean as the country is increasing its global presence”, President Lee Myung-bak said in a speech to mark the 563rd anniversary of hangeul‘s creation. A 6.2-meter-tall statue of Sejong the Great (1397-1450), who sponsored the creation of the Korean alphabet, was unveiled during the ceremony at Gwanghwamun Plaza in central Seoul. “We will establish more Korean language institutes overseas to make it easier for foreigners to learn hangeul and Korean culture,” Lee said. Commenting on an Indonesian minority’s recent decision to adopt hangeul as its official alphabet to transcribe its own language, the President said it has high potential to become a common script in various nations as it is easy to read and write.

In late October 2009, plans about making South Korea’s capital city Seoul a truly global city were also revealed. All powerful country brands have a powerful capital city brand, and Koreans want Seoul to become what Paris is to France, Rome to Italy or London to the UK. Seoul City’s business advisory council held a meeting to engage in in-depth discussions on creation of innovative brand values for Seoul, implementation of marketing strategies for Seoul in global competition and management of branding strategies and customer relationship for Seoul.

“We (Seoul City) focused on investing in areas that can enhance the brand value of Seoul such as culture, art, design and the environment. As a result, Seoul has been transformed – culture and art flows through the city like water and air,” Seoul Mayor Oh Se-hoon said during his welcoming address. “I am well aware that we have a long way to go. We need to have more effective strategies and concrete actions to secure (our spot in) top ten global brand competitiveness.”

Besides these efforts, South Korea is determined to raise its nation brand awareness and better streamline its profile internationally by promoting its national assets, including food and customs. Kimchi and bulgogi are representative vegetable and meat dishes of Korea, respectively. Last April the South Korean Ministry for Food, Agriculture, Forestry and Fisheries announced a concrete plan to further develop and globalize hansik, or Korean food. The projects include ways to make an industry out of competitive dishes, ways to upgrade the image of Korean food and ways to make Korean dishes more accessible. Additionally, Korea is also trying to boost hanbok, the traditional Korean garment, as a big part of Korean traditional culture.

Finally, on the Korea’s sports diplomacy front, an integral part of a nation’s soft power, Korea now seems to have reached its apex. Two bidding committees for major international sports events were launched in Korea within four weeks of each other: one on August 19 for the 2022 FIFA World Cup and the other on September 14 for the 2018 Winter Olympics. Perhaps the most curious aspect for both bids is that they are expected to prevent war on the Korean Peninsula if they are successful. The previous success of the 1988 Seoul Olympic Games and the 2002 Korea-Japan FIFA World Cup have, no doubt, played its stake in Korea’s bids aims. From a nation branding perspective, organizing these events send a message to the world of an open country which invites both athlets and spectators from all over the world to enjoy Korea.