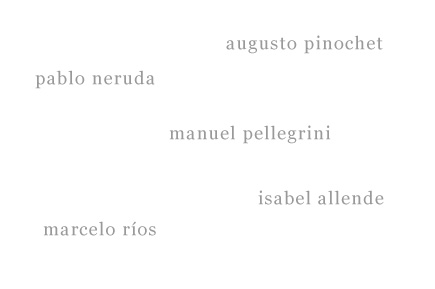 “Part of the problem with Chile’s image is that no one can picture a Chilean. Everybody thinks they know how an American, a Frenchman, an Italian, an Australian looks, behaves and talks, but the Chileans are a blank. So one of our objectives in the coming years is to ensure that more famous faces come from Chile”, Anholt said.

According to the Anholt-GfK Roper Nation Brands Index, awareness of Chile is very low outside South America. “In the South American continent, Chile’s image is strong and distinctive, but beyond the borders of Latin America Chile is definitely not a famous country; people know very little about it and so it ends up with a default ‘Latin-American’ image, which in fact is highly misleading”, the British policy advisor added. Anholt noted that “in Europe, Asia and even North America, Chile is assumed to be similar to a number of very different countries like Mexico, Brazil, Paraguay, Colombia. This needs to be addressed”.

Anholt is not pessimistic though. He has worked for 9 months on Chile’s image project, and believes that the South American country has “a great opportunity to take control of its international reputation”. “As a developing country, Chile can choose an alternative path for development that respects humanity, an alternative that’s not just focused on inflating GDP, but on caring for the environment, indigenous communities, education, culture and society”, he added.

“My advice is very simple: we have to change the way public policies are planned in Chile. And the people, the politicians, private and public investors also need to get into the habit of calculating the effects of these policies on the country’s reputation. For example, planning a major project like HidroAysén (which involves the construction of five gigantic hydroelectric power stations in southern Chile), it’s not enough just to think about energy supplies, job creation and return on investment: the environmental and reputational impacts of such a project need to be a part of the calculation”, he remarked.

By the way, Anholt launched yesterday his brand new website at simonanholt.com. Be sure to check it out; it is a mandatory visit for anyone interested in the field of nation branding as it has a wealth of knowledge directly from the father of nation branding : interviews, papers, editorials, articles, video interviews and field notes. The website also sports utilities such as a calendar with Anholt’s globetrotting and an interactive version of the Nation Brands Index, which is a lot of fun because it reveals what every country really thinks about other countries on people, products, governance, tourism, culture and immigration and investment.