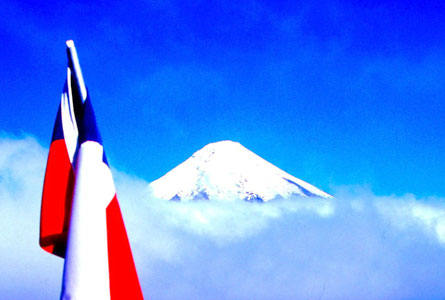 Think about Chile and if you’re just like most people, you’ll think about a narrow strip of land in South America where there was the infamous Pinochet dictatorship and little else. Probably it’s a poor Latin American country with lots of barefoot indigenous children on the streets, like in Ecuador or Guatemala.

The reality is pretty different. This month, Chile is likely to become the first South American country to join the exclusive club of the 30 richest countries, the Organization of Economic Cooperation and Development (OECD). In just a few days, Chile is likely be accepted as a full member of the Paris-based club of the wealthiest democracies in the world.

Amazingly, Chile is being pretty shy about this historic and unprecedented milestone. Instead of celebrating the acceptance into the OECD, Chile is keeping a very low profile. It seems that this attitude has something to do with Chile’s national character (a trait similar to that of the Finns, who also seem to be pretty shy when selling themselves). Apparently, Chile’s isolated geography has made Chileans modest and unbragging.

Chile’s discrete attitude may be very Chilean, but the truth is that the country is missing the opportunity to appear on the world’s spotlight this month in a proportionate size to the event’s importance. In Europe, when a new country enters the European Union, it usually celebrates it with fireworks, spectacles and fanfare. Most of the times, the result is that a good share of Europeans visualize that country X has just entered their community. This is no minor issue: for most Eastern European countries, entering the EU is like attaining a certification for a nation’s quality, so attaining this seal is worth a large celebration to make sure that everybody knows.

Entering the OECD is a similar feat for Chile, and my opinion is that Chile shouldn’t be this shy. The country should launch a large campaign to help the world visualize it, because let’s face it, no one knows that Chile’s economy has grown steadily for the last 20 years, that it leads all competitiveness rankings in South America, or that it has reduced its poverty rate from 39% of the population in 1990 to 13% today.

In this year’s Nation Brands Index, Chile was only 38. Bear in mind that only 50 countries are listed on the Nation Brands Index, so it means Chile could easily have a rank of #90 if all the countries of the world were listed. So there is certainly a gap between the country’s factual economic standing and the way it is perceived internationally, that is there is a great disparity between the country’s importance and how the country is considered. As the reputation of countries moves very slowly, without the necessary and properly managed signals to the outer world, it will take decades before peoples across the world catch out with Chile’s new reality.

This is not about national pride, it’s about Chile’s nation brand. It’s about helping exports or helping Chilean migrants living abroad. It’s about driving businesses, capital, tourists and skilled migrants into the country. Letting the world know Chile’s success will raise interest in the country, and eventually prompt someone somewhere to buy a book by a Chilean writer, to plan a tourism trip to Chile next year, or to think about investing in the country.

Furthermore, Chile badly needs this kind of media attention, because it’s an almost completely unknown country. As we have reported earlier, Argentina has Maradona and Brazil has samba, but what does Chile have in the international unconscious? Chile is a faceless nation, and it needs to get its message across – otherwise this fantastic milestone will pass unnoticed for international audiences.