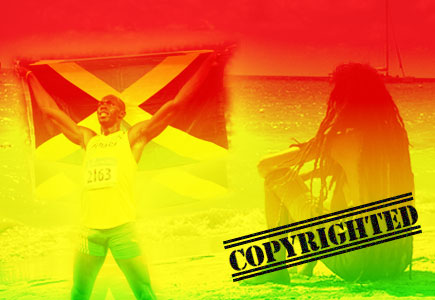 Jamaica is a brand in itself. Its colors are very distinguishable, and the ideas that come to mind when you hear the world “Jamaica” are very clear, and very widely shared. As a popular brand, officials in the country fear its country image could be in the hands of others, and on the other side think the country could make more off its popularity. In this article, Jacqueline Charles writes about it:

Usain Bolt had just been crowned the undisputed sprint king when a businessman boldly walked into the government office here hoping to cash in on the Jamaican track star’s record-setting dash. The visitor from the Cayman Islands sought to brand his creative ideas: U-Sane Energy Drink and Lightening Bolt Energy Drink.

“Our antennas went up immediately,” said attorney Carol Simpson, who heads the Jamaica Intellectual Property Office, which oversees trademarks, patents and copyrights. “The truth is we are very, very careful in looking at instances like this.”

Before Bolt’s world records in Beijing and Berlin, the gentleman might have gotten his way. Not any more. In an unusual move for one of the most marketed countries in the world, Jamaica has launched an aggressive campaign to protect its image — and profit from its brand.

“That Jamaica Brand, that sort of thing that pops up in people’s minds because of the Bolt-mania, that can lift you over the edge,” Prime Minister Bruce Golding told The Miami Herald, referring to the renewed interest in all things Jamaican after Bolt set world records in the 100 and 200 meters at the Beijing Olympics last year then broke them at the recent World Championships in Berlin.

Brand Jamaica is everything distinctively and creatively Jamaican: from Blue Mountain coffee and Bob Marley, to reggae and Rastafarianism to herbs and seasonings.

But while Jamaica has one of the strongest images of any country in the region, thanks largely to its successful tourism marketing campaigns, the country’s economy doesn’t profit much beyond tourism from its powerful identity.

“Lots of firms around the world use Jamaican imagery to promote their products and services but Jamaica remains firmly stuck in a holiday destination stereotype,” said Simon Anholt, who advises governments on how to improve their image.

“We don’t have a problem creating stuff; the problem is monetizing it,” said Dillon Powe, marketing executive with Passa Passa, a popular street party in one of Jamaica’s roughest neighborhoods. “Whether it’s music or culture, there is something about Jamaica that draws people in. It’s just a question of how to capitalize on it.”

Still, Anholt said Jamaica may be going too far with its branding campaign.

Though Jamaica’s campaign is centered around creating a “Nation Brand” – a term Anholt coined in 1996, Anholt believes the term “encourages politicians in the belief that they can simply spin their way into a better national image.”

“Countries have images, and those national images are as important to the prospects of those countries as brand images are to corporations,” he said. “Countries with a powerful and positive image find that everything they do … is easier and cheaper.”

The Jamaica campaign is not unlike what South Africa did after apartheid, rebranding itself into the “Rainbow Nation” under Nelson Mandela.

No one can say with certainty how much Jamaica loses every time its name or black, gold and green colors appear on a pair of Puma tennis shoes, or when its familiar flag is hoisted.

Everybody seems to be benefiting from the Jamaica craze — except Jamaica, said Finance Minister Audley Shaw. “From Puma in terms of Bolt and his shoes to major entities that are using things that were created right here in Jamaica,” he said. “We are going to take a very aggressive and proactive approach to the branding in so many respects, in sports and in foods… to make sure we benefit.”

Added Lisa Bell, the deputy president of Jamaica Trade and Invest, a government agency working with companies to help them understand the benefits of brand marketing: “[The Jamaica Intellectual Property Office] gets complaints on a daily basis of companies infringing on our intellectual property and our brand. We have to lock it up and make it authentic.”

NOT AN EASY SELL

But getting Jamaicans to buy into the idea of managing intellectual property is not an easy sell. Bell said she had a tough time before the Olympics convincing companies — and even potential Olympians — to trademark their brands. Few did.

“Can you imagine a consortium of Jamaican companies wrapping up their intellectual property related to the MVP runners club, tying that up, designing products using Jamaican expertise,” said Bell, referring to the MVP Track and Field Club, whose members include former world record holder Asafa Powell and other top athletes.

Bruce James, president of the club, said he’s spoken to the intellectual property office and isn’t totally convinced of the benefit of trademarking his runners. “We have 100 athletes in the MVP Track and Field Club. It’s not practical,” he said. “What I do in Jamaica only covers Jamaica. I would have to do the same thing in all 200 countries of the world and major markets.”

One Jamaican athlete has been aggressively protecting his image: Bolt. He registered several trademarks, including his famous stance after winning gold in China. He has trademarks in Jamaica, the U.S. and several other countries.

But protecting an athlete’s image globally can get expensive because Jamaica is not a signatory of the Madrid Protocol, which provides trademark protection in signator countries with just one registration. Lawyers, eager for business, have lobbied against joining the agreement but government officials say they’re making an effort to get Jamaica to sign.

Last month, the government introduced a National Branding Committee. Its task could include researching whether the word jerk, which refers to both the seasoning and a specific way of cooking chicken and pork, can be protected.

Even the name Jamaica is being considered for a trademark, officials say. But Anholt, the international image expert, said trying to legally protect the nation’s assets through branding is a “dangerous” idea that is ill-advised. “It’s surely more important for Jamaica to work on ways of leveraging and profiting from its wonderful image,” he said, “rather than dreaming up ways of preventing others from doing so.”