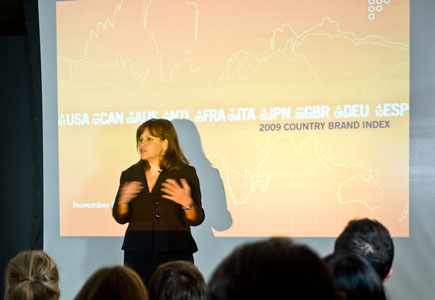 FutureBrand and Weber Shandwick yesterday released the new edition of the well-known Country Brand Index, undisputedly the most respected country brands index together with the Nation Brands Index. This year’s report has been pretty special for me as I (Nation-Branding.info editor Andreas Markessinis) had the honour to be elected as one of the world’s 40 country branding experts.

On an event in New York, FutureBrands’s Senior Executive Director Rina Plapler (pictured above) presented the results of this year’s Country Brand Index. The Country Brand Index is compiled by branding consultancy FutureBrand and PR company Weber Shandwick and ranks countries in terms of their brand strength. It also analyzes the political and economical sides of country brands, identifies emerging trends, looks at how companies influence country brands, and how countries try to manage their reputations.

This year found the United States had unseated Australia, which held the top spot for the past three years. The improvement of Brand America is consistent with what the Nation Brands Index 2009 revealed just about one month ago: the Obama re-branding effect, or as the Country Brand Index authors say, “the obamification of Brand USA”. “Regardless of how you feel about his politics, it cannot be denied that the election of Barack Obama was an iconic event that changed the way people around the world see and feel about the United States”, say the report’s authors.

Australia came in third this year with Canada rising to second place. New Zealand came in fourth and France fifth. Rounding out the top 10 were Italy, Japan, United Kingdom, Germany and Spain. There have been minor changes in the top-tier in comparision to the Country Brand Index 2008 other than the occasional spot-shifting among the usual suspects, but we’ll have a closer look in a few days, when we will publish an indepth analysis on the results of this year’s Country Brand Index. Stay tuned!