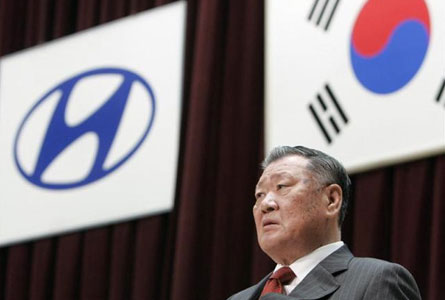 It’s over two years ago since South Korea launched a nation branding programme. At first, it looked as just another (fake) ‘nation branding’ project consisting of a new logo, a new slogan, some ads and some press releases. But throughout these two years the South Koreans have proved that were bloody serious about branding, and they have pursued a sheer, non-stop country branding project. An intensive, endless programme including an ambitious 10-points action plan. Yes, action. Not words, but facts. A true nation branding project with innovative thinking and actual policy-making – that is, an almost perfect combination of vision and execution. The University of Pennsylvania has published an article on South Korea’s efforts. Here it is.

What does France have that South Korea doesn’t? The Eiffel Tower, for one thing. It’s the type of national icon that public relations and marketing experts in the East Asian country dream of having. But this is a nation more known for angry street demonstrations and the nerve-rattling conflicts with North Korea than any countrywide icon.

While Korea is unlikely to whip up its equivalent of an Eiffel Tower — or a Sphinx or Golden Gate Bridge — any time soon, it is trying hard to raise the country’s profile around the world. It’s a goal that could take years to achieve, as Yoon Dae Euh, the inaugural head of the country’s Presidential Council on Nation Branding (PCNB), conceded at May’s Wharton Global Alumni Forum in Seoul.

But the presidential council is undaunted. With an annual branding budget of around 100 billion won ($81 million) to share among various regional and national bodies, the coordinating agency has recruited 47 advisers since last year, including eight government ministers, academics and private-sector executives, and intends to succeed despite a similar initiative having failed to gain traction a few years earlier. The mission now: To think big, with projects ranging from new campaigns to woo tourists to stepping up the work of Korea’s version of the Peace Corps, Euh said during a speech about the PCNB at the forum.

Many observers have said that if anyone can get a project like this up and running, it’s Euh. A professor of international business and finance, he was widely credited with raising the profile of Korea University while serving as its president between 2003 and 2006. Even so, Euh acknowledged that Korea has its work cut out, noting that few people outside Korea associate the country with being a dynamic emerging-market powerhouse and world-class innovator.

What the World Sees

Euh said there’s a sense of urgency in the country to change foreign perceptions on South Korea. One reason is emotional: The greater sense of pride that the 48 million Koreans should feel about their country’s economic transformation since civil war tore North and South Korea apart in the 1950s and left them in extreme poverty. Now, not only is Korea among the largest economies in the world, the country outflanks many other countries in terms of innovation and technological know-how, ranking fourth among 138 countries in the number of patent applications filed with the World Intellectual Property Organization and fifth in the export of high-tech products among 55 countries, according to the Samsung Economic Research Institute, a think tank.

But there’s also an economic motivation behind the PCNB. As Euh maintained in his speech, countries with a positive global brand image are more likely than others to attract foreign direct investment. Moreover, companies from countries with positive branding are treated favorably in international business transactions and need to invest less in marketing their products abroad.

In that vein, a survey by the PCNB found that consumers place different values on goods and services from particular countries. In the survey, consumers in Japan, Germany and the United States marked down the value of identical products 30% or more when they were told they came from Korea. That is a call to action for Euh. “Now it’s time of brand competitiveness,” he said. “It’s highly crucial for individuals, corporations, and cities and nations as well.”

The good news is that the country’s leading conglomerates have managed to make progress on their own, initially competing globally as low-cost producers of electronic and industrial goods and eventually moving up the value chain, Euh noted. In the latest annual Best Global Brands ranking produced by consultancy Interbrand, Samsung jumped from 21st place to 19th place, while Hyundai moved up three places to 69th place among several hundred brands. Interbrand cited bold global product development efforts at both companies for their improved status.

The benefits of company and country branding “is a two-way flow,” wrote Christopher Graves, CEO of Ogilvy Public Relations Worldwide, in Korea 2020, a collection of essays compiled earlier this year by McKinsey & Company. “A well-regarded country can help the perception of a product; likewise, a product considered to be of high craftsmanship and design can give a country’s branding a boost.” Graves reckoned that the key for Korea’s national branding success is to focus on design. “Great design has the power to elevate an entire corporation; sustained over a long period across many companies, it can lift an entire nation in the world’s esteem,” he wrote, citing the role of design in the rise of Japan’s economy.

The key for Korea, he asserted, is that it “must do more to connect its product design with the country itself,” he asserted. Think of Italy and its textile and design companies that make a garment with a “Made in Italy” label to connote high quality and exclusivity.

The Medium Is the Message

Meanwhile, Euh also said that branding isn’t just about advertising and promotional campaigns. Providing overseas economic development advice is another. Given that Korea was an official development assistance (ODA) recipient until the late 1990s and now is an ODA donor, Euh said Korea has a big responsibility to “share our know-how and provide customized, sophisticated consulting” to developing countries whose economies are today what Korea’s once was. Korea currently has 83 projects investing in 13 countries, ranging from Vietnam to Iraq.

Despite his enthusiasm for the work being done by organizations like KOICA, Euh is careful about not letting the country get carried away in hype, proving to be a level-headed critic of which branding messages will and will not go down with the international public. For example, while Korea has put itself at the forefront of reducing greenhouse gas emissions — being among the countries that have volunteered to cut emissions 30% by 2020 from 2005 levels — Euh is also aware that a “Green Korea” slogan wouldn’t chime with its image as a nation known for its recent industrialization. At the same time, Euh told local newspaper JoongAng Daily that promotional brochures with traditional Korean masks also don’t convey the best image for Korea and might “make foreigners wonder if the country is still a developing nation.“But he said, even with careful vetting, a recent tourism slogan, “Korea Sparkling,” had limited impact.

Now Euh is reaching the end of his two-year term as head of the PCNB. But he’s certainly not one to walk away from a challenge. He’s currently awaiting approval of his recent appointment as chairman of KB Financial, Korea’s largest bank which, following a recent governance scandal among its senior ranks, could benefit from Euh’s branding wisdom.