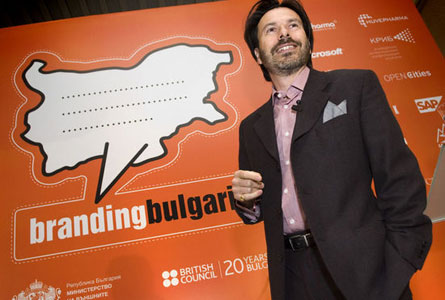 As we reported last Wednesday, a Branding Bulgaria conference was held in Sofia on March 1. The day before, Simon Anholt, one of the participants at the conference, had given a half-day Masterclass to a number of government ministers and business leaders. After his participation in the conference, Mr. Anholt was interviewed by several Bulgarian media. Here are some excerpts.

Business management magazine Manager.bg, for instance, asked Simon Anholt what is Bulgaria’s image in the world. “Bulgaria is not included in the Nation Brands Index. I guess if it was assessed and evaluated, it would probably be ranked somewhere between the Czech Republic (#32) and Romania (#41). Bulgaria is less known than the Czech Republic, and Sofia is less a popular tourist destination than Prague. On the other hand, Bulgaria has not such a negative image as Romania, which still suffers from memories from Ceausescu’s regime. EU membership certainly can significantly improve the position of a country. However,ranking ultimately  depends on how consistent and well-maintained are the country’s policies with regard to domestic and foreign affairs, culture, tourism and foreign investment, exports and economic growth”, the British expert answered.

“In this era of globalization, people take decisions every day as to where to go on vacations, what music to listen to, what books to read. This impacts the future of countries. In such a situation the country’s reputation is very important, because people make these choices based on prejudices which may have nothing to do with reality”, said Anholt.

According to Anholt, a country has a good and strong brand image if people in other countries feel happy that it exists. If people know that Bulgaria exists but are not grateful that it exists, then something needs to be done. What could make Bulgaria be more esteemed and appreciated?

“There are at least 25 things that excite people all over the world such as poverty, climate change, education, women’s rights, children, crime, terrorism,” said Anholt, adding that the country can choose one of these things, focus on it, to try to change it, thus making itself important for the rest of the world. As an example, he mentioned South Korea’s nation branding efforts, which include improving its image by spending more money on international financial assistance for poor countries.

To improve the reputation of Bulgaria, the country needs to engage and interest people in the world and make them think about Bulgaria and to be happy and grateful that it exists. “This is real politics, real innovation, not something dreamed up by PR agencies,” said Anholt. He warned that inventing a logo or slogan in order to advertise Bulgaria will not be enough and that it will not change people’s perceptions across the world about Bulgaria.

Much more important than advertisements, he considers relevant news events to be of interest to people and more likely to make them pay attention to the country. “The promotion of individual sectors is different from building the complete image of a country and the two should not be confused. Effective tourism promotion can help improve the country’s reputation indirectly, because it encourages more people to visit; if they have a good experience, they can then become positive advocates for the country,” said Anholt. He advised the government not to spend taxpayers’ money simply on providing yet more information about Bulgaria, because “we live in an information age” and this can be found easily on the Internet. “The challenge is to get people interested in accessing the information”, he said.