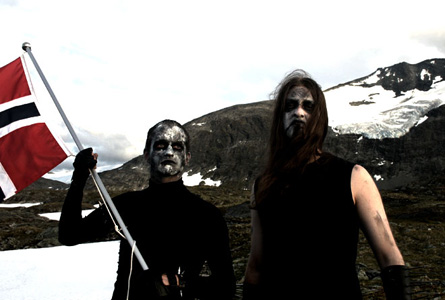 I never thought I would write such a story. News being reported on Norwegian media have it that the Norwegian foreign ministry has begun training aspiring diplomats in the Black Metal sub-culture, after foreign service missions noticed a rise in enquiries about the musical genre from around the world.

Now this is a story that touches me deeply. In the late 90’s, I personally run the world’s first black metal web-based magazine in Spanish language, aptly called Metalzin. It was the bastard child of two passions – black metal and the Internet. Not the full-fledged Internet that we all enjoy now, but a very, very basic, very early, almost raquitic internet.

I can’t think of anything more obscure than creating in 1997 an e-zine whose only topic was black metal and similar genres. Back then the so-called ‘Black Metal scene’ was a blackhole of mysterious P.O. boxes, cryptic bands coming from remote European countries, occult nicknames, illegible band logos and monickers, ravendark merchandise hand-made fanzines and amateur mailorders, but it had something dark and dangerous that I found mesmerizing. It captured my life for a few years time. The Black Metal phenomenon was radically extreme and extremely radical to the point of making the feared Death Metal look soft.

15 years later, with my teenager musical passions gone, and as a grownup in his 30ies, to see now that such an amateur, obscure, freak, often ridiculed musical sub-culture being upgraded to be considered something useful for a cuntry’s promotion through nation branding and public diplomacy is like magic in my eyes. It’s like the dots connecting 15 years later. Hence my excitement.

But let’s get back to the story. According to the news, the head of the Norway’s foreign ministry’s centre of excellence, Kjersti Sommerset, told newspaper Dagens Næringsliv that “we now have 106 foreign service missions and they get many enquiries from people who want information about Norwegian black metal as a phenomenon. In the training program, we have a large cultural program in order to give the trainees a good understanding of Norwegian culture and the cultural industry. Black metal is clearly a part of this,” Sommerset added.

The popularity and scale of the Norwegian black metal phenomenon is by no means small. Musically-wise, Norway’s black metal bands have toured across the world, they have sold records and merchandise in huge numbers and in fact the genre has become Norway’s top musical export, according to VisitNorway.com. But, beyond that, Norwegian black metal has made many friends for Norway – people who otherwise would never be interested in a country usually perceived as quiet and boring. Through black metal, many have learnt to like, love, admire, respect and support Norway.

Moreover, not few have begun learning Norwegian language to fully understand the Norwegian bands’ cryptic lyrics, which used to be written in their mother tongue. The Norwegian embassy in Greece, which is a country that has also long been a reknown producer, exporter and consumer of black metal, reports that interest in the Norwegian language has grown strongly in Greece – and black metal fans are obviously a large part of the reason. Many others have developed a wider interest in Norway’s overall history and culture out of their initial niche passion for black metal to the extent of pursuing Norwegian-related studies.

The Norwegian black metal popularity is also monetized in initiatives such as the touristic tours across Norway which show tourists the places where critical events in the black metal history took place, such as the Helvete record shop in Oslo, which is considered the epicenter of the so-called ‘Black Metal Inner Circle’ – the sect around which the whole movement was born.

Another usual stop in these tours is the beautiful stave churches, the most popular being the Fantoft stavkirke, which was arsoned by blackmetallers in 1992. Churches were sent ablaze because black metal fans considered that they were offensive to their pagan beliefs, since many of them were built upon former heathen cult sites. The first arsons occured in Norway, but the trend soon expanded and during the 90s over 30 churches were set on fire by black metal fans throughout Europe, from Norway to Russia and from Bulgaria to Germany.

The ‘manga’ of Norway

Norway has been very smart in trying to use Black Metal for their nation branding efforts. With a conservative mind, most countries would never dare to use such an extreme movement to promote their nation, but Norwegians know that you must let people enter by the door they know. People get interested in other countries through all kind of weird things, from football to music and from shopping to celebrities, and you can’t be very picky.

Norway can indeed exploit Black Metal wisely. Just like manga culture has made many youths all over the world to be interested in and sympathize with Japan, so can black metal make people be interested in Norway. Not only be interested, but also sympathize with Norwegian aspirations, buy Norwegian goods, hire Norwegians, travel to Norway as tourists, consume Norwegian culture and even support Norwegian diplomacy. Black metal is one of the few things (along with salmon and the fjords sightseeing) that makes Norway relevant to people’s lifes abroad.

Håvard Rem, the author of a leading book about the Norwegian black metal scene called Innfødte skrik (“Native calls”), supports efforts to train budding diplomats in the subtleties of black metal for nation branding purposes, stating that “for people under 40, it is this that they connect to Norway” and that “even if one does not like the music, it quickly becomes a topic for discussion.”

Of course, now Black Metal is much more acceptable than it was it was in the good ol’ days, when musicians like Varg Vikernes (aka Count Grishnackh) and Øystein Aarseth (aka Euronymous) went berserk killing each other and burning down churches in an extremist maelstrom of neo-pagan and Nazi leanings that made American gangsta bands look like Mary Poppins. Things went so hardcore that the Norwegian police had to create a black-metal-only special unit.

But things have changed a lot. Now black metal concerts are promoted by the government itself and black metal bands even perform respected concerts with established philharmonic orchestras. “You have to realize that this is the history, but it was 20 years ago and, today, Norwegian bands are acceptable,” Rem confirms to Dagens Næringsliv. He stressed that the past problems of Norwegian black metal were not necessarily relevant to selling the genre today, stating that “one can talk about Norwegian salmon without talking about salmon lice, and Ibsen was seen as destructive in his day.”

Aspiring foreign policy professionals themselves are reportedly keen on the move. Silje Bryne, who will work in the Norwegian mission in Paris next year, told Dagens Næringsliv that she feels she “will have a very big use for this” in the future. “I see the value in not just talking about Ibsen and fjords when one talks about Norway, but also about the export product that is black metal.” Bryne added that having “such a strong brand that means that we stand out among the Nordic countries is worth its weight in gold, it’s black gold.”