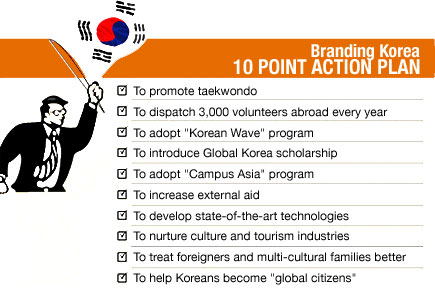 South Korea is the world’s 13th largest economy. It has emerged as a global leader in information technology, boasting the highest rate of Internet use, has reknown multinational brands and its pop culture has enjoyed a boom abroad, especially in Asia. However, the country still does not have a brand value that matches this reality. According to a survey by Simon Anholt’s Nation Brands index, the country’s brand value is estimated at less than 30 percent of its gross domestic product in 2007, while the United States’ nation brand was assessed to be worth 143 percent of its GDP and Japan’s 224 percent.

Its global image is far behind what Koreans think the nation deserves. To raise the country’s global image, the Korean government in January 2009 launched in a nation branding project, a project Nation-Branding.info has informed about here, here and here. Last week, the President of the Council on Korea’s Nation Branding, Euh Yoon-dae, said in its first report to the country’s president Lee Myung-bak that the project will consist of a 10-point action plan.

The 10 points of Branding Korea Action Plan are the following:

Most of the projects cited may not appear new to most Koreans, because many of them already exist or were undertaken in the past. The main difference now is that the various programs that are run by different ministries and agencies will now be better coordinated and managed.

According to the President of the Council on Korea’s Nation Branding, Euh Yoon-dae, this 10-points action plan’s ultimate objective is to lift Korea’s ranking on the Anholt’s Nation Brands Index (NBI) to the 15th position over a period of 4 years, 18 notches upwards from the current 33rd. “Korea is the world’s 13th largest economy with some $20,000 in per capita income, but ranks only 33rd in the global brand index. This is a big problem,” President Lee said. Denmark currently ranks 15th in the global ranking of nation brands, so is it realistic to assume that Korea can occupy that spot in 2013?

Simon Anholt, himself the creator of the NBI, has evaluated this objective as too ambitious. Anholt said most of the 10 initiatives listed are good and solid, but he is skeptical on whether the plan would lift Korea’s ranking from 33rd to 15th place by 2013 as the government intends. “Whether or not they will really lift Korea’s ranking in the NBI by 18 places in four years is quite another matter,” he said.

Simon Anholt said that national brand is not something that can be suddenly elevated over a short period of time as promised. “No country has ever moved by more than one or two places in the national brand index, and in any case this isn’t the proper way of using the index,” Anholt said in an interview with The Korea Times.

Instead of overall score, Anholt advised Korea to look in much more detail at Korea’s performance in certain individual sectors of the NBI such as people, culture or governance. He also advised the government to sharpen its strategy by clarifying what will distinguish or characterize Korea from all the other countries that do similar things, and what will Korea stand for, underlining these things are the most important when shared and endorsed.