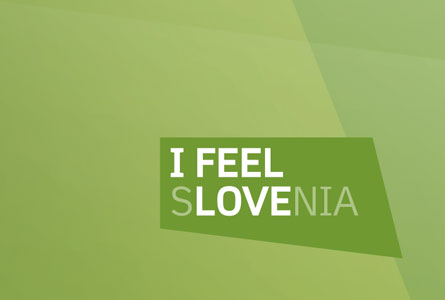 After publishing the Branding Slovenia story in early November 2009, I got an interesting response from an accredited source, Ms. Maja Konecnik Ruzzier, Assistant Professor of the Faculty of Economics at the University of Ljubljana, Slovenia. Ms. Konecnik has been involved in Slovenia’s national re-branding from the core, so her vision on the issue is virtually unique. She responded to my deliberately provocative article and she was kind enough to agree to share her vision on the branding Solvenia topic. Here is her contribution:

I read the article by Andreas Markessinis with an interest, since branding Slovenia is a topic in which I am professionally and personally involved. I believe that Slovenia represents one of the best examples of countries that were in need of a nation brand and have developed it systematically. Those who have already visited it and those who will visit our beautiful country in the future probably know what I am talking about. The reality in Slovenia is much better than its image, which means that an appropriate brand strategy should send the right signal to improve our image.

The article offers a lot of interesting ideas. I can agree with most of them. But let me start with the idea that I simply cannot share with the author. The idea about changing our name is not realizable (of course, the idea about changing the country’s name was only an exploration within an experiment, as stated clearly in the article – Ed.), nor is it a smart solution in our case. I do agree that a nation should look into the possibility of changing its name if it so desires, but in this case there should be something seriously wrong with the country name. There is nothing wrong with our name and Slovenians are satisfied with it. Slovenia declared its independence in 1991, which means that it has been present on the world map for 18 years. It is the example of one of the most successful countries to transit from socialism to a market economy. It boasts stable GDP growth and is viewed as a safe country, ranked among the countries with the lowest degree of risk. During the previous 18 years of our independence, many important steps have been accomplished. To mention just the most important ones: Slovenia became a member of the United Nations Organization, and in 2004 joined the European Union and NATO. It was one of the first new accession members to introduce the European currency (Euro) in 2007 and successfully held the European Union presidency in 2008. From that point of view, Slovenia is definitely a young country. However, although Slovenia became an independent country only a few years ago, it has many centuries of history and culture, which importantly contribute to its identity as well as characterize the personality and behaviour of Slovenians.

While there is nothing wrong with our country name, there are some problems with our recognition and foreigners sometimes confound Slovenia with countries or destinations that have similar names. The problem is relevant for those people who have not visited Slovenia and/or do not know it well. Due to our geographical position and Slavic origins, misunderstanding and confusion is most frequently seen between Slovenia and Slovakia, another European country, which could be perceived as similar by those foreigners who are unfamiliar with both of them. However, the mentioned problem is not relevant only to our young country. Let me point out another example, which will demonstrate that even countries with strong brands face similar problems. Some confusion also arises between Australia and Austria, which are both very strong and powerful brands with many years of history. The geographic position of mentioned countries is completely different, as are the countries themselves. I am not saying that these two countries confront the mention problem as often as we do, but some confusion is definitely present. Mistakes are also evident among academics, even though they are professionally involved in researching the topic about country images.

Further, I like the idea about our new flag proposal, which underpins our existing branding strategy. As the author already mentioned, the idea of changing the country visual elements (especially the flag) is also relevant among Slovenians. These kinds of discussions have been topical several times during our short history, but so far we have not decided to change our flag. The author’s flag proposal is in accordance with one of the conclusions of our new branding strategy. The green colour was recognized as the most typical colour in Slovenia by all relevant stakeholders, who took part in the process of our new brand development.

Finally, what I agree with the most is that we should work hard on our branding strategy to overcome the mentioned problems and posit Slovenia as a unique country on the world map. And we are definitely working on it!

Therefore, I can claim that Slovenia is certainly not going through an identity crisis, but is in fact for the first time on the right path to building a strong country brand. The most recent attempt that resulted in the I feel Slovenia brand development was undertaken in 2007 as the first systematic branding approach in the country. The process of developing the country brand was complex and involved all relevant stakeholder groups. Stakeholders came from key country areas (economy, tourism, culture, science, sport, civic matters, and politics). Relevant stakeholders were invited to take part as one of the following target groups: opinion leaders, representatives and general public. The main idea was to develop the Slovenia brand identity in line with the views of all stakeholders who constitute the country brand and will live it in the future. 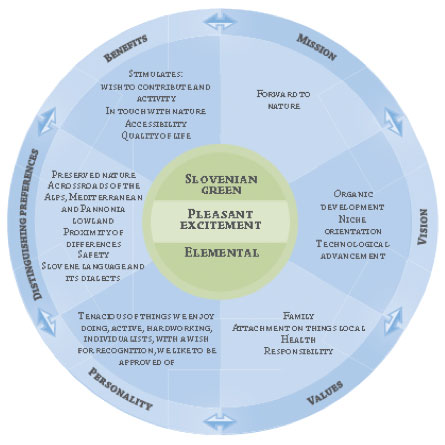 The story of the brand is visualised by the slogan I feel Slovenia, which was chosen in advance, and a logo designed in accordance with it. The final visualisation of the I feel Slovenia logo (Figure 2) draws from the brand’s identity characteristics.

During the I feel Slovenia brand development, the efforts were aimed at including identity characteristics of the country of Slovenia, and ensuring that the key idea, which was to be communicated at home and abroad, would be clear and simple. We also strove to develop a brand and marketing strategy that would be considerably different from branding strategies applied in other countries. In relation to that, the following features of the I feel Slovenia brand should be pointed out. Firstly, the principal identity meaning of the brand is generated through the experiential promise of the Slovenian green. In this context, the shade of green is not associated solely with the colour, but also with the entire experience that one enjoys in Slovenia. Secondly, the mentioned identity story is narrated through its two visual elements (slogan and logo). Designed in accordance with the suggested colour, the logo serves as an enhancement of the slogan, while the brand carries the same name.

I have presented only the main ideas of our new branding strategy and hope that it is evident that we are seriously working on our identity. The I feel Slovenia brand was developed with an aim to overcome the problems with Slovenian awareness, recognition and its image. Nevertheless, the country brand development is a long term process, which yields results only after a longer period of time. Therefore, we hope, the results of our new branding strategy will come in the near future.