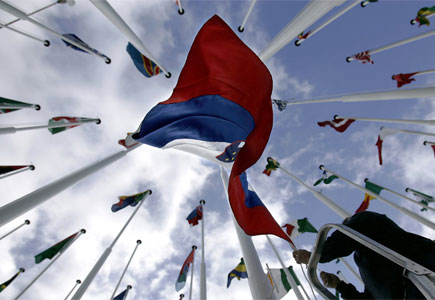 Slovenia has an identity crisis. People confound it with Slovakia. The names of the two countries, and even their flags are virtually interchangeable. Their languages are also both Slavic and so similar that both nationalities call their language with the same name: Slovenians call it “slovenski” (“slovenian”) and Slovaks also call it “slovensky” (“slovak”).

Their recent histories are strikingly similar too. Both countries emerged to become nation-states in the early 90’s, and both as a result of the disintegration of a former Communist country in Eastern Europe. With these stunning similarities, not even in a century will Slovenians be able to distinguish themselves from Slovakians (or the other way around); here’s a graph on these similarities: 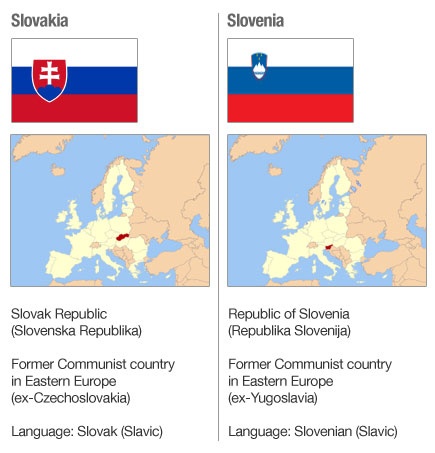 This mix-up has led to many public and ridicule confusions, some of them involving first-line politicians such as George W. Bush and Silvio Berlusconi, who have called Slovenian presidents and prime ministers “Slovak” by mistake in front of dozens of journalists. On the Lonely Planet guide, the photos of Slovakia are in reality of Slovenia. In March 2007, the Greek Stavros Dimas, the EU Environment Commissioner criticized “Slovakia’s poor environmental legislation” and urged the country to catch up with the rest of Europe. He meant Slovenia, of course. The two countries are so accostumed to these many confusions that a diplomat once revealed that in an undisclosed Western European capital, the Slovenian embassy meets every month with their counterparts of the Slovak embassy to exchange wrongly-addressed mail.

That’s a serious problem for a country. It’s like having one Nike and one Adidas with the same logo, the same colours, the same business, the same look&feel and the same tone of voice.

Slovenia could change either its flag or its name (or both) to avoid confusion. And this is what this article is all about – only a playground for a nation branding fantasy. If this experiment had to take place, Slovenia’s flag should be changed to green, just like the Netherlands’ flag should be orange. Why green? Because of several reasons.

Green is regarded as the “national color” of Slovenia by Slovenes themselves. The Slovenian national sports teams, in fact, usually wear green too instead of wearing white, blue and red (the colours of their flag), as the picture below shows: 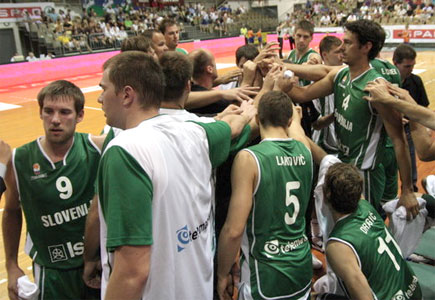 Additionally, when a new tourism brand identity was launched for Slovenia in 2007, the green color was predominant. Officials explained why ‘Slovene green’ formed the core of the Slovenian brand identity:

“Green is more than a colour in Slovenia. It is ‘Slovene green’ that expresses the balance between calmness of nature and diligence of the Slovene people. It stands for intact nature and our focus to keep it that way, for lifestyle equilibrium and an orientation towards nature. Last but not least, ‘Slovene green’ represents the harmony of all senses that help us to experience Slovenia. One never remembers Slovenia in images, but as the scent of forest, the murmur of stream, the astonishing taste of spring water and the softness of wood.”

Moreover, as one of Slovenia’s strengths is the country’s splendid nature (and Slovenian officials strategically attempt to project that image to the world), green colour fits the country’s image very well. The country has some of the most well-preserved environments in Southern Europe with pristine lakes and rivers, dense forests and untouched landscapes. As evidence, it hosts the largest protected brown bear community in Southern Europe (if you wonder which country is second, you’ll be surprised that it’s Greece).

A new flag for Slovenia

The idea of Slovenia changing its flag is not a freak idea nor a new invention. In fact, the current Slovenian flag is still considered a kind of a transitional solution taken immediately after the country gained independence, and discussion on the adoption of a new permanent flag arises from time to time.

In 2003, for instance, the Slovenian parliament issued a competition for the design of “design elements” that may be used for the new state symbols of Slovenia. The competition sought for the design of a flag, a coat of arms and an emblem. Almost 200 proposals were received and on October 28 that year, the jury published the decisions. The flag proposal that gained the first prize was designed by Dušan Jovanovi?, a Slovenian designer who explained it as follows: “Blue, white and red stripes in the middle form the traditional pattern of Triglav, mirrored in a river underneath as a metaphore of the Slovenian waters”. The flag had some American and Greek taste in it and as consequence it wasn’t very Slovenian in my opinion. In any case, see by yourself: 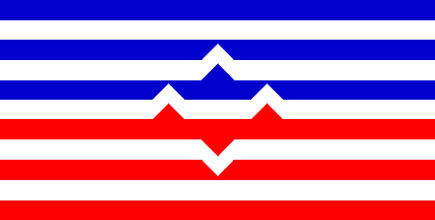 The awarded design, however, was never adopted. Instead of the more radical change of the flag, a softer approach was chosen by Slovenian officials and a “nation branding” strategy including a new logo and slogan was developed: “I feel sLOVEnia”. And the new logo, what a surprise, was green too. The “I feel sLOVEnia” tagline is currently used in tourist promotions as well as for marking high-quality Slovenian goods that represent well the country. The “Slovenian Green” appears in most official communications, and if you visit Slovenia’s tourist board website, you’ll notice that it is also predominantly green: 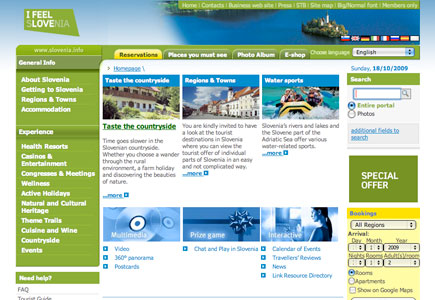 With the reasons why green is the color, it’s time for a new proposal for Slovenia’s flag. A new design which is not as disruptive as that sketched by Jovanovi?’s, but that it is more loyal to the current Slovenian flag in shape and one that honours the memory of the country’s rich history keeping the Slovenian coat of arms. But also a new design that embraces Slovenia’s attempted mind colours: greens and white, which stand for nature and cleanness. This new flag proposal only by design and color set casts Slovenia apart: it is the flag of not another (Western-perceived) former Communist, backward Slavic country in the dark and wet Eastern Europe, but of a green and clean country at the heart of the continent. These new colors sets Slovenia apart, putting it in another “mental division”. This flag takes the country off from the Balkan backwater and puts it in the Alpine league together with Austria and Switzerland.

So, here is the proposal: 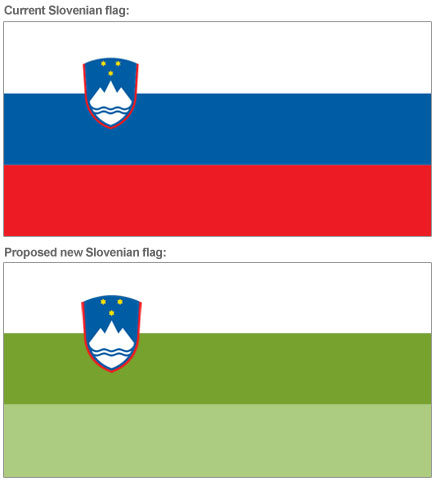 But, is changing the flag enough for Slovenia to avoid traditional confusions with Slovakia? Probably not, as the name would still be too similar. Changing a country’s name is no minor challenge, but this is after all just an experiment – for once no one should take this too seriously.

I’m certainly no expert whatsoever about Slovenian history (nothing of the kind), but if we look back at Slovenia’s history we notice that the country has been traditionally associated with a region and people, Carniola and Carniolans. This region occupies more than half of the territory of today’s Slovenia, so it can be considered to be a proto-Slovenian nation. Carniola could be a good name choice for the country, as it is pertinent, catchy, distinctive and uncomplicated for most speakers.

Another possible name would be Carantania. Old Carantanians are considered to be the ancestors of modern Slovenians. However, the old Carantania was located North of modern Slovenia, and most of its territories belong now to Austria. In fact, there is a Slovenian ethnic minority in Southern Austria. And the name of the modern region of Carinthia, in Austria, probably derives from Carantania too. So, in a sense this name could become troublesome as it would arise suspicacies and that wouldn’t help its adoption. As of today, I can’t think of another name, but I’m sure others can. After all, the purpose of this article is definetely not to research the most appropiate name for re-naming Slovenia, but only pointing at the possibility of a name change.

Lest we forget, and before all hell breaks loose, changing a country’s name is nothing new either. Many countries in the world sport names which have been chosen to replace their former names. In old Europe, countries like Lithuania have debated about the need to change its country name at some occasion. Same for the United Kingdom or the Netherlands. In South America, a debate on whether it was convenient for Guatemala to change its name to Guatemaya to remark its Mayan roots also emerged. In Africa, many nations chose another name of their taste for their newborn country after they were de-colonised.

Why Slovenia and not Slovakia?

In this Slovenia-Slovakia mixup, it could be argued why should Slovenia be the one to change and not Slovakia instead, as both suffer the same problem. Well, for a number of “raw and straight”, unpretentious and properly unresearched reasons: first of all, “Slovakia” sounds more familiar, as it was part of the name of a known country, Czechoslovakia, while Slovenia sounds completely new to the world. In fact, the aforementioned misconceptions show that people call Slovenians “Slovak” more than the other way around.

Second, if Slovakia changed (say, to Moravia, the name of an ancient Slovak territory), that wouldn’t solve the problem for Slovenia because the latter could still be mixed up with Slavonia, a nearby region.

Third, Slovakia has nearly 3 times the population of Slovenia (about 6 millions against approximately 2 millions), and Slovakia is also more than twice as big (50,000 sq. km against 20,000 sq. km). So that Slovenia changes instead of Slovakia looks more reasonable and more appropiate.

Whether it is Slovenia or Slovakia the one to change, it appears that either country should at last take a serious stand on its national identity, iconography, name and image to raise above these confusions – they are certainly hurting both countries’ prospects.