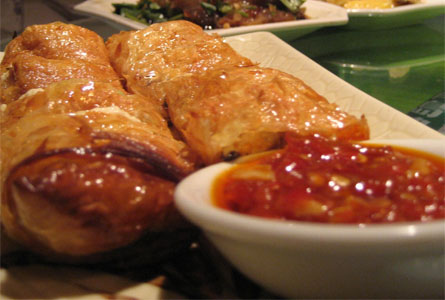 For the global gourmand, Taiwan has a reputation as a premier foodie paradise.  Ask anyone who has been to the island, and the first words that come out are related to its gastronomic treats.  The culinary treasures and pleasures of Ihla Formosa are experienced in the vast array of goodies to be sampled at its colorful night markets for which the island is famous, and enjoyed in the vigor that the Taiwanese engage in the nation’s most favorite pastime: eating.   The sweet potato-shaped island is considered a hub for food-lovers based on its rich cuisine that reflect roots from mainland China, plus influences from its period under Japanese rule as well as Hakka and other indigenous flavors.

Taiwan’s emergence as a culinary center has its origins in the Chinese civil war and Cultural Revolution.  With the defeat in 1949 of the Kuomintang and their retreat to Taiwan, many of China’s upper classes fled as well, bringing many of mainland’s master chefs with them across the Taiwan Strait.  Later, during the Cultural Revolution that began in 1966 in China, many more chefs fled mainland China for Taiwan as the Communist government shut down restaurants as a symbol of bourgeois refinements.   As such, for many years it was Taiwan that kept the pilot light burning for the traditions of Chinese cuisine.

More recently, Taiwan is trying to expand on its reputation and gastro-brand through an initiative to promote Taiwan through enhanced culinary diplomacy.

Gastrodiplomacy is predicated on the notion that the easiest path to winning hearts and minds is found through stomachs.  Gastrodiplomacy was a technique perfected by Thailand, which first used its kitchens and restaurants as outposts of cultural diplomacy.  Given the growing popularity of Thai restaurants around the globe, in 2002, the government of Thailand implemented the “Global Thai program” as a means to increase the number of Thai restaurants. The Thai government’s rationale, The Economist noted, was that the boom in restaurants, “will not only introduce delicious spicy Thai food to thousands of new tummies and persuade more people to visit Thailand, but it could subtly help deepen relations with other countries.”

More recently, countries like Korea have sought to promote its national brand through culinary diplomacy; concurrently, this gastronomist has previously argued that Korea should take advantage of the popularity of Korean taco trucks in Los Angeles as a medium to promote Kimchi Diplomacy.

On the Taiwanese Gastrodiplomacy Menu

As part of the campaign, Taiwan will host international gourmet festivals as well as help send local chefs to ply their culinary skills at global culinary competitions.  Meanwhile, the initiative will  support the introduction of Taiwanese restaurants abroad, with a focus on major overseas shopping malls and department stores as well as sampling stations for Taiwanese cuisines at international airports.  Moreover, the gastrodiplomacy plan is anticipated to enable local businesses to set up 3,500 restaurants in both Taiwan and abroad, and generate close to NT$2 billion in private investments.

At home in Taiwan, the government is planning on establishing a new Taiwanese food foundation- a culinary think tank that will assist coffee shops and restaurant chains that promote Taiwanese foods abroad.  The creation of such an institute could not come at a better time.  Recently NPR’s Morning Edition featured a story of the immense popularity of Taiwan’s coffee store 85C, which recently set up shop in Irvine, California.  The Taiwanese coffee chain has been introducing American palates to Taiwanese tastes with fares including iced-sea salt lattes and squid ink buns, and has been greeted with lines of customers stretching out the door.  As one who has tried the iced-sea salt latte here in Taiwan, I must say they are surprisingly very good and has a flavor very similar to that of salted caramel ice cream mixed with coffee.

The campaign is also intended to help brand Taiwan through marketing Taiwanese delicacies abroad via advertising promotions.  It has yet to be mentioned if Taiwan’s more-unusual yet iconic delicacies such as stinky tofu will be included in the campaign.  Stinky tofu has attained a bit of a cult status among foodies.  The fermented bean curd gained prominence during Bizarre Foods host Andrew Zimmern’s losing battle with the delicacy, and can often be found at food fairs devoted to unusual culinary dishes.  Sometimes the best nation branding is connected to the most irreverent characteristics, idiosyncrasies and items that signify a country; as such, Taiwan should embrace stinky tofu as a dish to perk up global awareness, if not global nostrils.

Keeping with our more irreverent theme, thus far Taiwan has missed out on a tremendous opportunity to attach itself to the pearl milk tea (also known as bubble tea or boba) craze that sprang up from its shores.  Pearl milk tea with its black tapioca balls swimming around the bottom, has become a global phenomenon yet whose Taiwanese provenance has not been directly linked.  The sad reality is that most American teenagers are very familiar with bubble tea from their ubiquity at shopping malls than the country that invented the balls of gooey fun.  However, it isn’t too late to draw connection between bubble tea and Taiwan, it just simply requires some appreciation for the irreverent.  To reconnect Taiwan to its bubble tea creation, the island should consider creating an “International Boba Day,” perhaps along the lines of the Tomatina Festival in Spain which attracts some 50,000 revelers to toss tomatoes in Buñol’s streets.

Taiwan’s efforts to use gastrodiplomacy as a means to enhance and expand the island’s reputation as a foodie hub are indeed positive steps to better promotion of Taiwanese culture.  As advocated in this article, however, a keen eye for the irreverent is a must if you really want to make the nation brand stand out.  Highlighting exotic tastes and flavors, and engaging in nontraditional forms of public diplomacy help under-recognized nation brands gain more prominence in the field of culinary and cultural diplomacy.

Article by Paul Rockower, a gastronomist and recent graduate of the Master’s of Public Diplomacy program at the University of Southern California. Rockower is currently a Visiting Fellow at the Taiwan Foundation for Democracy, researching Taiwan’s Public Diplomacy.  He is the Communications Director for Public Diplomacy Corps, an organization dedicated to bringing public diplomacy to the public.