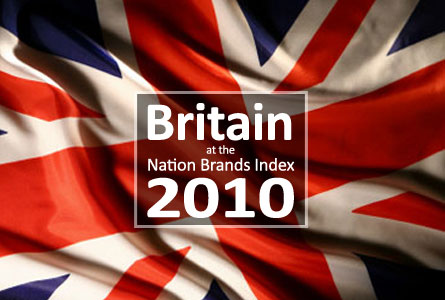 The UK is arguably one of the most robust nation brands, being rated in the top six for all six brand ‘dimensions’ (Governance, Exports, Immigration and Investment, People, Culture, and Tourism).  The table overleaf shows that the UK’s Governance ranking has gone up one place to 6th, with more positive perceptions of the new Government, as has the UK’s ranking for Immigration and Investment (to 3rd), highlighting that Britain is seen as a great place to live, work, and study.

The UK’s Culture ranking has slipped from 6th to 4th which continues the gradual decline from 3rd place in 2008.  The chart below shows how Britain is ranked for a number of different statements, allowing us to drill down into these brand ‘dimensions’ to understand how the UK is perceived in more detail (click to enlarge). 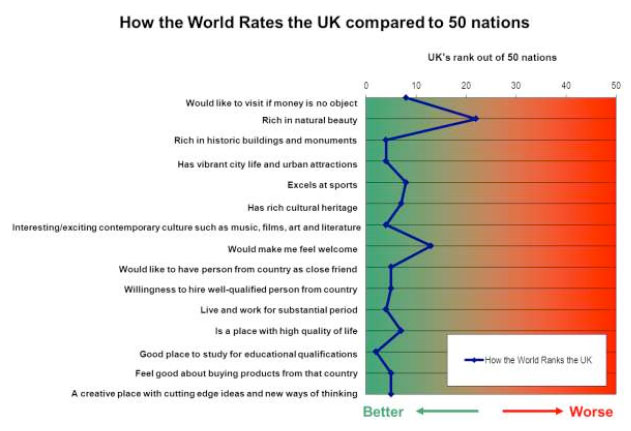 Tourism: The first four statements constitute the ‘tourism dimension’, and we can see here that the UK is seen as a world-class destination in terms being rich in historic buildings (4th), and having vibrant city life and urban attractions (4th).  This supports the idea that has come out of numerous studies, showing that Britain has a great mix of history and modernity.

If money were no object, the UK would (on average) be eighth on people’s list of nations to visit.  These rankings in 2010 are the same as they were in 2009.  One ranking which has changed though is the UK’s ranking for being rich in natural beauty, up to 22nd from 24th in 2009.  Despite this improvement, this remains the UK’s lowest ranking across all dimensions, which we’ll be looking at in more detail shortly.

Culture: As mentioned previously, the UK’s ranking for the ‘culture dimension’ fell from 3rd in 2008 to 4th in 2009 and down to 6th in 2010.  This decrease occurred despite the UK holding its position for each of the culture statements which contribute to the overall culture dimension score: excels at sports (8th), has a rich cultural heritage (8th), and being an interesting and exciting place for contemporary culture such as music, films, art and literature (4th).

People: Other nations are often seen to be more welcoming than the UK (rank 13th), so there is some room for improvement here. However, perceptions of British people are not negative; many would be positive about employing a UK national (rank 5th) and would be open to having close friends from the UK (5th).  None of these ranks have changed since 2009.

Immigration and Investment: The UK is seen as a great place to live, rated as the 2nd best place to study for educational qualifications and 7th as a nation with a high quality of life – many people would be prepared to live and work in the UK for a substantial period (rank 4th, up from 7th in 2009).

Exports: People feel positive about purchasing a product that says it was made in the UK (ranking it as the 5th best nation on this aspect, up from 6th in 2009) and view the UK as a creative place in terms of its cutting edge ideas and new ways of thinking (5th).

All in all we can see that the UK is a very strong nation brand, rarely ranked outside the top ten nations for each of the statements that contribute to the overall ranking of 4th.  The following section takes a look at how different countries rate the UK in terms of two of its perceptually weaker aspects, natural scenic beauty and welcome.

Britain ranks just 22nd in terms of natural beauty.  As natural beauty is strongly related to ‘aspiration to visit’ a destination, this is an area where it would be very rewarding to improve perceptions.  The chart overleaf shows how different countries rank the UK’s natural scenic beauty compared to fifty nations.  The closer the blue line is to the outside of the circle, the better the perceptions. 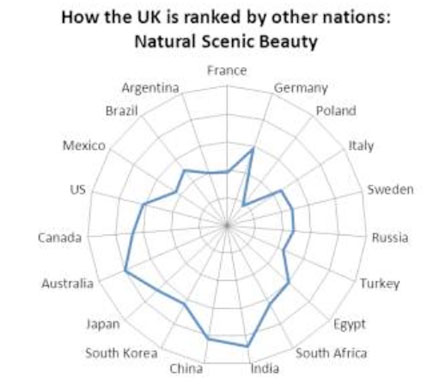 We can immediately see that perceptions of the UK’s natural beauty are strongest in India (ranking the UK 7th), China (10th), and Australia (11th), where there is strong appreciation of Britain’s ‘green-ness’.

Relatively speaking, perceptions are also somewhat positive in Canada (17th), the USA (20th), Japan (17th), South Africa (19th), and Egypt (21st).  Other nations, particularly those located in South America or Europe (and especially Poland) have less positive perceptions of the UK’s natural scenic beauty, dragging down its overall ranking.  Pulling down the UK’s natural scenic beauty rating could be a lack of awareness of what’s on offer, a feeling that the UK is dominated by urban landscapes, or perhaps, a feeling that its landscapes are too similar to those found in other locations to be regarded as different or dramatic.

Whatever the exact reason, improving awareness and perceptions would almost certainly encourage more people to consider visiting and exploring Britain, spreading the benefits that visitors bring even further.

The other relatively weak tourism-related area is ‘welcome’.  The UK ranks 13th in terms of the welcome people would expect to receive, not a poor ranking, but outside the top ten nonetheless.  However, there is plenty of evidence to suggest that the reality of the UK’s welcome is better than non-visitors’ perceptions of it, suggesting that the UK could achieve a higher ranking. 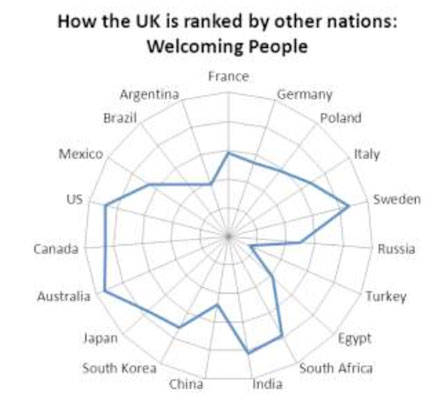 Turkey’s ranking of the UK’s welcome is the most negative of the twenty nations surveyed (rating the UK 43rd out of 50 nations for its welcome).  However, encouragingly, this has moved up from 48th in 2009, so there is some evidence to suggest that perceptions are improving.  It is more than likely that Britain’s support for Turkey’s potential future accession to the EU is behind this improvement.

Aspiration to Visit the UK

One of the key tourism questions included on the NBI survey asks respondents how likely they would be to visit each destination if money were no object.  Overall, the UK is ranked 8th on this measure, but the chart below splits out how each of the twenty surveyed nations rank the UK. 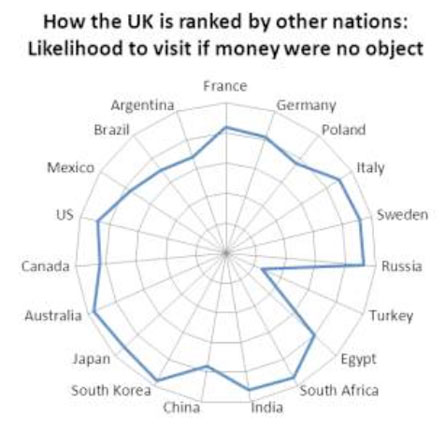 It is apparent that most of the surveyed nations see the UK as a highly aspirational destination, many rating it in their top ten.  The exceptions to this are Turkey (who rank the UK 38th), China (13th), Argentina (17th), Brazil (16th), Mexico (13th), Poland (13th), and Egypt (11th), many of which rank the UK relatively poorly in terms of its perceived welcome or natural scenic beauty. Those nations with the highest aspiration to visit Britain are Australia (3rd), South Korea (3rd), and South Africa (4th).

It is clear that Britain is a strong and robust nation brand; its ability to weather storms such as the banking crisis, the economic downturn and the MPs’ expenses scandal shows that Brand Britain will continue to be very highly regarded for years to come.  Despite its strength there are areas of relative weakness, where different nations have contrasting views of Britain’s natural beauty and welcome.  There is a need to improve perceptions here, and whilst it is encouraging that the UK’s ‘natural scenic beauty’ rank has improved in 2010, it is clear that major shifts in perceptions are not achieved overnight.

Report made by VisitBritain