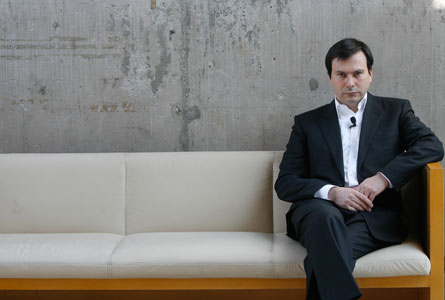 Some weeks ago we reported about the Branding Bulgaria conference, where one of the main speakers was the reknown Simon Anholt. Now it’s the turn for neighbouring Turkey to ask the British expert for his opinion. An article by the Turkish newspaper Hurriyet follows.

Successive Turkish governments have spent hundreds of millions of dollars to promote Turkey’s image abroad, but have been unable to overcome cultural prejudices. Simon Anholt, who coined the term ‘nation branding,’ says the issue is not about marketing or communication, but concrete policies that put the nation on a respectable spot on the global map

Simon Anholt, who coined the term ‘nation brand’ (not ‘nation branding‘, as he will always make clear) in 1998, advises governments around the world on how a country can engage more productively with other countries.

Turkey spends millions of dollars every year promoting its image as a bridge between the East and the West, but a top expert in “nation branding” says it’s not about communication or promotion, but concrete policies.

Turkey ranks 33rd among 50 countries in an annual Nation Brands Index. Speaking to the Hürriyet Daily News & Economic Review, Simon Anholt, a British independent policy advisor specializing in the field of nation branding, said the Turkish government must develop policies to improve the “brand” of the nation.

Turkey has to find ways of making itself “indispensable” to other peoples through “policies, cultural relations, exports, its diaspora and its behavior in the international arena” and by ensuring that people in other countries feel “glad that Turkey exists,” Anholt said.

“Then, people will start paying attention to Turkey and be prepared to change their minds,” he told the Daily News earlier this week.

Anholt, who coined the term “nation brand” in 1998, advises governments around the world on how a country can engage more productively with other countries.

Turkey’s best chance to increase its reputation in the world is “to be the bridge between Europe and Asia, between Islam and other religions,” according to Anholt.

Anholt, who has advised more than 40 countries, regions and cities since 1996, has been conducting nation and city brands indexes in cooperation with GfK Roper Public Affairs & Corporate Communications each year since 2005.

The Anholt-GfK Roper Nation Brands Index includes a large-scale international study that measures perceptions of 50 countries and 50 cities each year via a survey of more than 25,000 respondents from 26 countries.

“A large number of governments use this brand index to track their international standing and monitor progress,” Anholt said.
The concept of measuring the global perception about a country consists of six main fields: exports, governance, culture and heritage, people, tourism, investment and immigration. Turkey’s best scores last year were in culture and tourism, with rankings of 26th and 28th, respectively. In the same year, Turkey ranked 29th in governance, 32nd in people, 33rd in investment and immigration and 34th in exports.

“Some of these positions are objectively lower than Turkey actually deserves,” Anholt said. “Turkey’s image [underrates] the reality, especially in terms of cultural heritage, where Turkey ranks 13th as a global average, but as low as 31st among Americans and 29th among Canadians, for example.”

More marketing not the answer

The fact that the “product” is better than the “image” does not mean that the solution is more marketing and communications, he said.
“The problem is getting people sufficiently interested in Turkey to abandon their prejudices and be prepared to change their minds,” he said.

“Image comes from policy, not from communications. The Turkish government needs to abandon the naïve and wasteful belief that national reputation can be directly manipulated through marketing communications,” he said.

Turkey should start thinking about how it can actually earn a better reputation, Anholt said. “Creating a vision for the future of the country and its role in the world with the full participation of business and civil society is the first stage.”

According to Anholt, activities to promote a country may “contribute slowly and indirectly” to forming an image. “In the case of tourism promotion, these are of course necessary. But you can’t really call this ‘nation branding’ because it has little or no direct impact on overall international perceptions of the country. It is a simple selling operation,” he said.

“Countries are judged by what they do and what they make,” he said. “This is the reason why our work has nothing to do with marketing or public relations. It is about innovation, competitiveness, trade, international relations, sustainability, diplomacy, cultural relations and talent attraction.”

Responding to a question on Turkey’s candidacy to the European Union, Anholt said such membership would contribute greatly to nation-branding efforts, as it would be “the first step toward proving its value as a cultural bridge.”

All the countries that have joined the EU in the past few years have experienced a significant improvement in their governance scores in the Anholt-GfK Roper Nation Brands Index.

According to the nation brand index of 2010, the United States is the most admired country globally, followed by Germany and France. The United Kingdom ranks fourth, followed by Japan, Canada, Italy, Switzerland, Australia and Sweden.

Top emerging markets have been rising in the field, as well – Brazil and China showed some of the greatest rankings gains between 2009 and 2010.