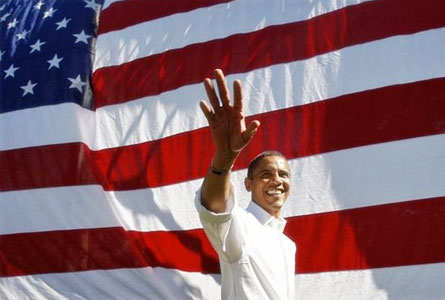 The relationship between President Obama and Brand America’s revival is not new – we’ve touched the issue on several occasions since Brand America skyrocketed in the 2009 edition of the Nation Brands Index, the first annual Anholt/GfK country brand report since Obama’s election. In this piece, U2 leader Bono gives his insights on how Obama’s halo and America’s new substantial changes (together with a new etiquette) have brought a new ‘mood’ in world affairs.

A few years ago, I accepted a Golden Globe award by barking out an expletive. One imagines President Obama did the same when he heard about his Nobel, and not out of excitement.

When Mr. Obama takes the stage at Oslo City Hall this December, he won’t be the first sitting president to receive the peace prize, but he might be the most controversial. There’s a sense in some quarters of these not-so-United States that Norway, Europe and the World haven’t a clue about the real President Obama; instead, they fixate on a fantasy version of the president, a projection of what they hope and wish he is, and what they wish America to be.

Well, I happen to be European, and I can project with the best of them. So here’s why I think the virtual Obama is the real Obama, and why I think the man might deserve the hype. It starts with a quotation from a speech he gave at the United Nations last month:

“We will support the Millennium Development Goals, and approach next year’s summit with a global plan to make them a reality. And we will set our sights on the eradication of extreme poverty in our time.”

They’re not my words, they’re your president’s. If they’re not familiar, it’s because they didn’t make many headlines. But for me, these 36 words are why I believe Mr. Obama could well be a force for peace and prosperity — if the words signal action.

The millennium goals, for those of you who don’t know, are a persistent nag of a noble, global compact. They’re a set of commitments we all made nine years ago whose goal is to halve extreme poverty by 2015. Barack Obama wasn’t there in 2000, but he’s there now. Indeed he’s gone further — all the way, in fact. Halve it, he says, then end it.

Many have spoken about the need for a rebranding of America. Rebrand, restart, reboot. In my view these 36 words, alongside the administration’s approach to fighting nuclear proliferation and climate change, improving relations in the Middle East and, by the way, creating jobs and providing health care at home, are rebranding in action.

These new steps — and those 36 words — remind the world that America is not just a country but an idea, a great idea about opportunity for all and responsibility to your fellow man.

All right … I don’t speak for the rest of the world. Sometimes I think I do — but as my bandmates will quickly (and loudly) point out, I don’t even speak for one small group of four musicians. But I will venture to say that in the farthest corners of the globe, the president’s words are more than a pop song people want to hear on the radio. They are lifelines.

In dangerous, clangorous times, the idea of America rings like a bell (see King, M. L., Jr., and Dylan, Bob). It hits a high note and sustains it without wearing on your nerves. (If only we all could.) This was the melody line of the Marshall Plan and it’s resonating again. Why? Because the world sees that America might just hold the keys to solving the three greatest threats we face on this planet: extreme poverty, extreme ideology and extreme climate change. The world senses that America, with renewed global support, might be better placed to defeat this axis of extremism with a new model of foreign policy.

It is a strangely unsettling feeling to realize that the largest Navy, the fastest Air Force, the fittest strike force, cannot fully protect us from the ghost that is terrorism …. Asymmetry is the key word from Kabul to Gaza …. Might is not right.

I think back to a phone call I got a couple of years ago from Gen. James Jones. At the time, he was retiring from the top job at NATO; the idea of a President Obama was a wild flight of the imagination.

General Jones was curious about the work many of us were doing in economic development, and how smarter aid — embodied in initiatives like President George W. Bush’s Emergency Program for AIDS Relief and the Millennium Challenge Corporation — was beginning to save lives and change the game for many countries. Remember, this was a moment when America couldn’t get its cigarette lighted in polite European nations like Norway; but even then, in the developing world, the United States was still seen as a positive, even transformative, presence.

The general and I also found ourselves talking about what can happen when the three extremes — poverty, ideology and climate — come together. We found ourselves discussing the stretch of land that runs across the continent of Africa, just along the creeping sands of the Sahara — an area that includes Sudan and northern Nigeria. He also agreed that many people didn’t see that the Horn of Africa — the troubled region that encompasses Somalia and Ethiopia — is a classic case of the three extremes becoming an unholy trinity (I’m paraphrasing) and threatening peace and stability around the world.

In an asymmetrical war, he said, the emphasis had to be on making American foreign policy conform to that formula.

If that last line still seems like a joke to you … it may not for long.

Mr. Obama has put together a team of people who believe in this equation. That includes the general himself, now at the National Security Council; the vice president, a former chairman of the Senate Foreign Relations Committee; the Republican defense secretary; and a secretary of state, someone with a long record of championing the cause of women and girls living in poverty, who is now determined to revolutionize health and agriculture for the world’s poor. And it looks like the bipartisan coalition in Congress that accomplished so much in global development over the past eight years is still holding amid rancor on pretty much everything else. From a development perspective, you couldn’t dream up a better dream team to pursue peace in this way, to rebrand America.

The president said that he considered the peace prize a call to action. And in the fight against extreme poverty, it’s action, not intentions, that counts. That stirring sentence he uttered last month will ring hollow unless he returns to next year’s United Nations summit meeting with a meaningful, inclusive plan, one that gets results for the billion or more people living on less than $1 a day. Difficult. Very difficult. But doable.

The Nobel Peace Prize is the rest of the world saying, “Don’t blow it.”

But that’s not just directed at Mr. Obama. It’s directed at all of us. What the president promised was a “global plan,” not an American plan. The same is true on all the other issues that the Nobel committee cited, from nuclear disarmament to climate change — none of these things will yield to unilateral approaches. They’ll take international cooperation and American leadership.

The president has set himself, and the rest of us, no small task.

That’s why America shouldn’t turn up its national nose at popularity contests. In the same week that Mr. Obama won the Nobel, the United States was ranked as the most admired country in the world, leapfrogging from seventh to the top of the Nation Brands Index survey — the biggest jump any country has ever made. Like the Nobel, this can be written off as meaningless … a measure of Mr. Obama’s celebrity (and we know what people think of celebrities).

But an America that’s tired of being the world’s policeman, and is too pinched to be the world’s philanthropist, could still be the world’s partner. And you can’t do that without being, well, loved. Here come the letters to the editor, but let me just say it: Americans are like singers — we just a little bit, kind of like to be loved. The British want to be admired; the Russians, feared; the French, envied. (The Irish, we just want to be listened to.) But the idea of America, from the very start, was supposed to be contagious enough to sweep up and enthrall the world.